This wedding photo, believed to date from the 1920s, was taken in the back yard of one of the group of houses known as Cross Hill, on the junction of Church Street and Station Road.

Each side of the tiny triangular site held two houses, with three toilets in the central yard area.

Cross Hill today (August 2000). The houses were demolished in the early 1930s and the site donated to the people of Madeley by the owner, Alderman Thomas Legge, the former proprietor of the Blists Hill brick and tile works that carried his name.

You can just see the Old Vicarage and the tower of St. Michael’s Church in the background on the right, the Six Bells public house is just out of the picture to the right. 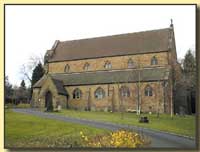 The Roman Catholic Chapel in High Street, dedicated to St. Mary, built in 1853, in the early english style, consists of a nave and aisles, and will accommodate about 300 persons; the Rev. William Molloy is the pastor, and resides in a house adjacent
From the Post Office Directory for Shropshire, 1863

Madeley has a long history of religious tolerance, as a result the area has always had a significant Catholic population. (No larger photo – don’t click!) 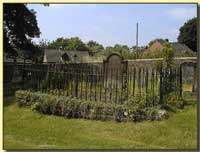 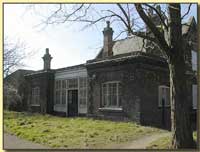 The old Madeley Market Station (LNWR/LMS). Madeley had a passenger service from 1861 until 1952, with freight services ending in 1960.

There was also a GWR station on the Madeley Junction — Ironbridge line.

Madeley Court — once the home of Basil Brooke, Speaker of Parliament, and Abraham Darby the First.

This old print was sent to us from New Zealand by Helen Verrall, whose husband is a descendant of Francis Woolfe, the builder of Upper House