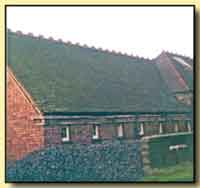 Memories of the Workhouse – A child’s view from outside

Mary Tomkinson remembers the building in the 1940s. By then the ‘workhouse era’ was, officially, over but here – as in many places – there had just been a change of name and many of the ‘inmates’ from the old workhouse days remained in The Beeches Hospital only now they were called ‘patients’ or ‘residents’.

“When I was a child the workhouse was a scary place. There were only a few cottages, a lot of trees and no street lights as it was during the war. There was said to be a man in a cage up the drive and we used to run past as fast as our legs would take us”!

“When I was about 14 my friend and I were coming home from the cinema. We were walking through Ironbridge when a lady tramp got off a bus from Bridgnorth. She was wearing a knitlock nightie, a mac and a pair of plimsolls. A paper carrier bag with string handles contained her only possessions.

She told us a policeman has paid her fare and asked where the workhouse was. We offered to show her the way as it was difficult to tell her. We went up Church Hill and she had to keep stopping to get her breath. At the workhouse we took her to the office where the person who answered the door said they could not take her but invited her inside.

We hung about believing she would be turned out. Had that happened I knew I could take her home to my Aunty (who had brought me up) as she would take her in. Just then an ambulance drove past and we were told she was going to Shifnal although I did not know there was a workhouse in Shifnal”.

Tramps were fed, bathed and provided with overnight accommodation. To ‘earn their keep’ they were expected to break up stone for use as road surfacing.

The window in the photograph was covered with a grille and the stone had to be broken into sufficiently small pieces to pass through the holes in the grille.

Even long after the workhouse had become an NHS hospital many of the patients had begun their residence there in the old workhouse days – after all it was the only home known to some and they would have nowhere to go if ejected. Many also suffered from a variety of health problems both mental and physical and they would have found it difficult to cope in the outside world.

Jacqui Howes, Jose Wilson and Iris Woodman remember some of the ‘characters’ who had transferred to The Beeches from the old workhouse:

“The story of the ‘man in the cage’ remembered by Mary Tomkinson had an element of truth in it. One patient called Alan had to be restrained, largely for his own safety, and he spent a fair bit of time in a hut with bars on the front”

“Big Bill, Wilf and Norman were great friends. Bill was a gentle giant, usually placid but sometimes very determined. Wilf was a short ‘Norman Wisdom lookalike’. He had a very kind heart and used to save his precious comics for my children. At meal times he always turned up to help feed a fellow-patient who suffered from cerebral palsy. Norman had been born with a deformed arm and had been left at the workhouse as a baby. He liked to think he worked at The Beeches and was a mine of information. He could always be relied upon to show workmen around the intricacies of pipes, wires and machinery.

The highlight of the week for these men was their visit to Madeley when they walked into town to spend their pocket money. Bill was in charge of timekeeping. Norman looked after the money and Wilf took responsibility for finding the way there and back. Individually they had problems but, as a group, functioned excellently

“Bessie Kemp – in common with all too many residents – had been committed to the workhouse for the convenience of her relatives. She had been born blind and therefore classed as ‘subnormal’ – which was far from the case”.