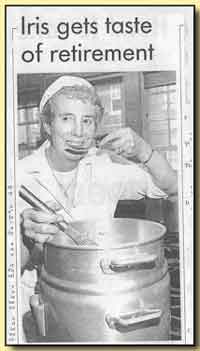 Iris Woodman (nee Gittins) arrived at The Beeches in 1948 to take on the task of head cook. With the help of a single part-time assistant she was responsible for feeding 156 patients.

Iris was employed to work a 48 hour week on a 7am-8pm rota, with split shifts, which gave her 1 and a half days a week off and 1 long weekend a month. She had to work for 12 months before being entitled to 2 weeks paid leave and was expected to be on duty every Christmas Day. She earned a weekly wage of £4. 2s a week out of which 3s 6d was taken for superannuation plus national insurance stamp contributions and tax!

There were 6 wards of which two held 42 ‘mentally subnormal’ residents known affectionately as the ‘boys and girls’. These patients did various chores around the hospital but needed constant supervision. The nursing staff were mostly part time local ladies who Iris remembers as being exceptionally dedicated.

Iris arrived each day at 7am and – like everyone else – had to sign in and out. By 7am the boiler man had already lit the boiler which provided the steam for the kitchen. A large wheel turned the steam on and off to three large boilers one for porridge and the other two for potatoes and a second veg. After breakfast the porridge boiler was washed out and used to make rice pudding. These tasks were carried out by Isaac Elder (one of the ‘inmates’) who was known throughout Ironbridge as the Beeches cook as he went to the market every Friday. Iris can still remember him using a washing boiler stick to stir the porridge and the inevitable lumpy result. Unusually for that time Isaac was coloured and neither he, nor anyone else, could remember how he came to be in the workhouse.

On her first day Iris was shocked at the procedures:

“I couldn’t believe what I saw – the meat for stew was tipped into one boiler (large lumps, fat, gristle all in with onions and carrots floating in the water. Flour was still rationed so there was no thickening. Tea consisted of bread, butter and jam and supper was bread and dripping. All the bread for 156 patients had to be cut by hand”!

By 8pm that day, when the doors were locked behind her and she set off to walk home to Coalbrookdale, she had decided the job was not for her. However, her mum told her to think again and to think about the patients not just herself. By the next morning she had decided to give it a go and try to improve the menus with more variety and definitely to produce porridge without the lumps!

Routine was very important at The Beeches. Dirty laundry was collected, and brought back clean, by Mrs Tristham who lived in Broseley. Some was taken to the Wrekin hospital. The lack of lifts was always a problem. The ‘girls’ laid tables, cleared tables and washed up. They cleaned the wooden tables and the floors – the latter on their hands and knees with hard soap and scrubbing brushes. Some could not be allowed knives and some had to use enamel utensils because they would throw unpredictable tempers and break crockery – even the enamel ware items were badly chipped through ill-use.

The ‘boys’ helped in the garden where Joe Fletcher and Arthur Coy were in charge. They picked apples and pears from which Iris made jam and bottled fruit. They also swept the yards and the long drive and carried food around the wards. They were fetching and carrying all morning and most evenings. They peeled the potatoes in the store next to the boiler house. They used an enormous galvanised bath to carry the peeled potatoes to the kitchen. The peelings were cooked up in a gas boiler for the pigs who were in the charge of Jack Griffiths ‘the pigman’ who also cleaned the styes. Jack also ran errands into Ironbridge for staff and patients and Iris often kept his dinner hot when he was late from walking back up the hill with his heavy haversack – she had to shout as he was very deaf. The pigs were slaughtered by local butcher, Jimmy Gardener, who also provided other kinds of meat. Bacon flitches were hung in the cellar and pork pies were made by a Broseley lady called Edith Tonkinson.

Nothing was wasted – brawn was made from the pigs heads and trotters and the intestines were cleaned to make chitterlings. There were no fridges so milk was supplied daily, in huge churns, by the local hygienic dairy and bread (4 and a half loaves a day) was supplied by Moore’s bakery. The ‘girls’ picked soft fruit – gooseberries, raspberries and black and red currants – under the supervision of Iris and the female attendants. At meal times Iris had to pull a rope which clanged a bell at the highest point in the dining room and which could be heard everywhere. On Sunday mornings the dining room was used for church services and, once a month, for communion. Wilfred Thomas (another of the ‘boys’) played the piano and Rector Roberts took the services. Entertainments were few. In the afternoons some of the ‘girls’ gathered around the range in the kitchen and, occasionally, Iris accompanied some of them to the Plaza Cinema in Coalbrookdale.

Mention must be made of ‘Raz’ (one of the ‘boys’ whose real name was Charles Hurst) who was everyone’s favourite. He would smoke anything – including old stubs rolled up in newspaper – and he swore like a trooper. Everyone could understand his swear words but his general conversation was a different matter as he had a terrible stutter which he tried hard to overcome. He would do any job in return for a ‘fag’. He kept a big lawnmower by the ‘tramp wards’. He called it his horse and took a bucket of water to it every day.

There was no electricity just gas for lights and no appliances. Puddings were mixed with a wooden spoon. Christmas Day was particularly busy as there was a turkey for each ward and one for the staff. Each turkey weighed about 25lbs and was a real effort to cook and to lift in and out of the oven. Dr Whitney and his family came to carve and serve the diners. Iris made Christmas puddings and Christmas cakes –one for each ward and one for the staff. All this was done with the help of just one assistant cook. Male and female attendants did all the washing up, cleaning and, of course, the staff waited on the ‘boys and girls’. It was always a very special and rewarding day. Christmas 1975 was the first time that Iris was able to spend Christmas day in her own home – she felt like the proverbial ‘fish out of water’.

It is easy to imagine how she felt on her first day back in 1948 and little did she think that she would remain in post for nearly 40 years. However, for the most part, they were very happy years. Changes were made and conditions improved. Properly trained nursing staff were employed. ‘Masters’ were replaced by ‘Administration Officers’. In the kitchen a full-time second cook was taken on together with four part time assistant cooks and six domestic assistants.

Rations also became more plentiful and The Beeches became known for its good food and very clean kitchen in which everyone took a pride.

Now (2006) Iris thinks often about her staff and the hard work they put in to improve things for staff and patients. The chief cook had the praise but nothing would have been possible without team work.