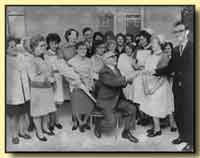 In 1968 the late Alec Watson was appointed ‘Matron’ at The Beeches:

“My first impression was of a building constructed as a typical workhouse, and still partially lost in a time warp. Both internally and externally the buildings were largely unaltered and, in some respects, not particularly well maintained. The atmosphere, in some areas, was rather depressing but also had great potential. However, the most encouraging impression I came away with was of the staff. They lacked facilities, equipment and were short of many basic material as well as being short-staffed in relation to patient numbers and general overcrowding but they still managed a caring and constructive outlook”

Alec took on the challenge and, during his first 18 months introduced the following changes:

Over the years other improvements were implemented as finances became available: 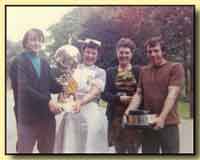 Many small-scale improvements were also implemented during this time – notably in terms of equipment, furniture, fittings, curtains, lighting, flooring and décor. All of these made it more pleasant for patients and eased the burden on the staff. A more efficient boiler house and incinerator were built on the old ‘tramps’ houses’ and a proper car park was provided.

Alec recalled many ‘characters’ among both patients and staff :

“Harry Anson was the site handyman and a real individual – small in stature but huge in devilment! He was a great practical joker, particularly on the nursing staff – targets generally considered to be asking for trouble. I was not supposed to know about these escapades but – off the record – enjoyed many a good laugh. He generally came off worst but never gave up trying and the staff loved him as he was always willing to sort problems with a cheery smile and a quick quip. He never put off until tomorrow or next week work that could be done today”.

Alec summed up his years at The Beeches as follows:

“I have many happy memories particularly of a very efficient, kind and dedicated staff, whether nursing, domestic, catering or others. A very high standard of nursing care was achieved particularly in the very basics of nursing without which the rest of nursing is flawed – sadly the basics are not so evident today. They were a staff which saw patients as individuals, friends and a family in need not just numbers and cases. They put far more into their work than was expected of them, a superlative team who could teach the staff of today’s hospitals many important elements of general care – skills which seem to be lost in today’s units. You cannot reverse time but I hope, in the future, some of those lost good practices will be rediscovered and implemented again”

“My first impression of the hospital was, to say the least, daunting. The stark exterior and the concrete yards were reminiscent of the ‘workhouse’. The wards were badly in need of upgrading and the staff worked in conditions far from satisfactory i.e. patients had to be carried up and down steep stairways, water heated by coke-fired boilers and food, for both patients and staff, cooked on an old AGA in an outdated kitchen” 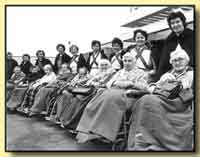 However, within a few months of her arrival changes began to be made and an extensive programme of upgrading and redecorating was carried out. Towards the end of the programme some of the work was carried out as part of a ‘Community Service’ Landscaping Project whereby offenders who had been brought before the courts, and sentenced to a number of hours ‘Community Service’, were employed on local projects

“When the scheme was completed The Beeches Hospital took on a new lease of life. Internally improvements were astonishing and the hospital now stood in grounds with pleasant areas of lawns and flower beds, somewhere the staff were proud and happy to work and the patients could be cared for in a much more comfortable and homely environment”

Jacqui discovered that many of the older residents, who were former workhouse inmates, subsisted on half-a-crown a week ‘pocket money’. She spearheaded a campaign for fairer remuneration and succeeded in ensuring they were paid proper pensions.

A Staff Social Club was formed and, over the next few years, they played ‘friendly’ darts matches with local pubs, held Christmas Fairs, coffee mornings, rummage sales etc. to raise money for patient comforts be it a new ward television, or to take patients on outings e.g. to Drayton Manor or for an evening visit to the British Legion at Coalbrookdale. Eventually they even managed to acquire a minibus which was surplus to the requirements of the Transport Department at the Royal Shrewsbury Hospital.

“We were like ‘one big happy family’; there were some real ‘characters’ at The Beeches amongst both patients and staff. We even had an unplanned visit from Princess Alexandra who was on an official visit to the nearby Care Village in Beech Road. She spoke to some of the Beeches staff and patients who had gone to see her arrive and they invited her across to The Beeches. To their astonishment, and to the consternation of her protection squad, she duly arrived and stayed chatting for about half an hour. Never a dull moment and I enjoyed every minute of my time there”

In the late 1980s the Health Authority decided that the smaller hospitals should be sacrificed to fund the building and running of ‘Telford Hospital’ and the run-down began. There was a determined campaign to ‘Save The Beeches’ and even a visit from Sir John Harvey-Jones and a camera crew prior to his BBC television series ‘Troubleshooter’ in which the Shropshire District Health Authority took part. However, ‘the die was cast’ and, after a visit to Coventry Churches Housing Association who had a subsidiary called Extra Care, discussions began with their management board which led to the buildings being leased to the CCHA at the end of 1991 although ownership has remained with the Health Authority. Extra Care, who operate the nursing home, later split off from the CCHA and formed a charitable trust.

Jose Wilson arrived in late 1972. Newly relocated to Woodside with six small children she began work on the male ward where Jane Watson was Ward Sister. The Beeches had changed beyond all recognition over the previous four years but – having trained at the Queen Elizabeth in Birmingham – it was something of a culture shock!

The male ward patients were mostly long stay and had an assortment of medical conditions. They were nursed in two ‘long’ wards of 12 beds each and there were areas for them to sit during the day but, in truth, they spent far longer in bed than would be acceptable in a modern hospital. There were no lifts in the building (although two were later installed) and, when a death occurred, the body had to be carried down winding stairs in a canvas sling:

“There were around twenty original Workhouse ‘inmates’ at this time and most were registered as ‘imbeciles’ although, in fact they were people who did not quite fit into society. Most were middle-aged and had been at The Beeches many years. They all had little jobs to do and were very proud of their work. As the National Health Service was reformed they were no longer allowed to continue with their jobs which caused them some distress. Eventually, most were housed more appropriately although two of the ‘girls’ still lived at The Beeches when Extra Care took over in 1992. For the first time these ladies were provided with their own rooms and bathrooms and to see the pride in their faces was a joy to behold” 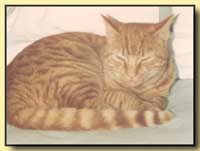 Jose had planned to work at The Beeches for only a few months – she stayed 19 years (most of the time as Night Sister). When Extra Care took over on the closure of the hospital she stayed on as Assistant Manager of the Nursing Home, now known as Lincoln Grange.

Later, Jose moved to the Lady Forester Nursing Home at Much Wenlock and was delighted when staff and patients there were invited to a concert at Lincoln Grange:

“One lady, Nancy, became very quiet as we approached Ironbridge and it soon became apparent she was quite distressed. She had not realised that ‘Lincoln Grange’ was the old ‘Beeches Hospital’ to which she had been sent as a small child when her family became destitute. Nancy found it physically impossible to enter the building and was taken back to Wenlock. The memories of being separated from her father and brothers was too much for her. The sexes were always segregated and Nancy, as the baby, found this particularly hard to take”