Madeley Court and its surrounding area 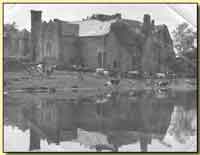 Madeley Court was the home of the Brooke family, lords of the Manor of Madeley. Robert Brooke was Speaker in the House of Commons in the reign of Mary I. He bought the Manor of Madeley from Wenlock Priory in 1544 and built his house there in 1553 on the site of an earlier monastic grange.

The house is L-shaped and constructed of fine, locally-quarried ashlar blocks. It has large gabled attic dormers. The hall range, opposite the gatehouse incorporates part of the original 13th grange which had a wing at the south-west, now demolished. An east-west orientated building crossing the centre of the later courtyard has been located by excavation and tentatively identified as a pre-dissolution chapel associated with the grange. Flanking the hall are rooms of the 14th and 15th centuries while the east wing and porch are 16th, the windows with their transoms and mullions being typical of that period. The stone porch to the right of the hall range has a moulded round arch and ornate gables with volutes, pediments and strapwork foliage decoration. The east wing contains a large 16th century timber newel staircase with raised moulded panelling and chimney piece. Considerable enlargement and remodelling took place in the 17th century.

The stone gatehouse, with its distinctive polygonal towers is a fine example of classical Elizabethan style and has been described as an ‘architectural gem’. It relates to a fashionable trend and could not be described as defensive. It is mostly later 16th century in date. The roof covering is of ‘Harnage Slate’. This is the colloquial term for an Ordovician shelly limestone which occurs as layers within the Hoar Stone Edge grit. Geologically speaking it is not slate. The county has no indigenous slate. However, the appearance of these stone flags is aesthetically very pleasing and they were used for roofing a number of prestige properties from the 14th – 17th centuries. Their weight required very strong roof frames!

In the original walled garden of the Court is a very unusual ‘astronomical toy’, a large square block surmounted by a hemisphere and with recesses on the sides for astronomical dials. Clearly a complex instrument it is reputed to have acted both as a sundial and as a means of finding the position of the moon in relation to the planets. It is of late 16th or early 17th century date.

A short distance away from the main house is a restored brick building with mullioned windows, once thought to have functioned as a water-driven corn mill, but now known to have been built as a maltings, with huge storage facilities on the top floor. More recently it was used as a barn. Architecturally this timber-framed building is of exceptional significance.

The Brooke family were prominent Catholics and supported the king during the Civil War. Their land was sequestrated although they were later able to buy it back. In 1705 the Court and c. 520 acres was sold for £5,400.00 to Mathias Astley of Staffordshire. Abraham Darby I rented part of the house from 1711 until his death in 1717. Later it was leased mainly to tenant farmers. In 1828, Stourbridge ironmaster, James Foster, bought it and began mining in the area. His company sank seventeen pits altogether. In 1843 he built three furnaces nearby which worked until 1902, being finally dismantled two years later. Their former existence is commemorated in the name of The Three Furnaces public house. Production at the site ceased in 1910 and fifteen of the seventeen pits were abandoned officially in 1911.

Despite his initial wish to restore the Court to its former glory it declined further under his ownership. In the mid-19th part of the main building was undermined by some of his pits. In 1880 it was described as ‘fast going to decay’ and ‘a scene of utter desolation’. The last tenant, Joseph Barnett bought the estate between 1919 and 1936 and it was farmed by the Barnett family until 1964 when it was sold to Dawley Development Corporation. It is now part of the Clarion Group of hotels. However in addition to the physical remains of earlier periods it still retains some of the ambience of former times and is said to be home to several ghosts!

Traces of the industrial period in the history of the Court are all around us in the surrounding area. The distinctive mounds, which are such a prominent feature of the grounds, were formed by the dumping of spoil from the pits. They were already being planted by the early part of the 19th and are now covered with oak, sweet chestnut, birch and pine. Two ponds were apparently created to the north of the house when the Wash Brook was diverted after the original fish ponds became filled with slag. It is possible that these were later used to provide a basis for the existing balancing pools.

Running parallel with the footpath behind the house is the line of the GWR branch which leads to Buildwas Power Station. Just beyond the railway bridge which spans the path near its junction with the Silkin Way is the ruined brick tower of a windmill. There has been a mill on that site since at least 1702 and the mill was last known to operate in 1840. It was apparently used as a bunkhouse for the railway navvies. No machinery survives. The Coalport branch of the London & North Western Railway once ran to the east of the house. This went from Hadley via Oakengates, and along the route of the former Shropshire Canal down Lee Dingle to a station at Coalport on the north bank of the Severn opposite the GWR station on the other side of the river. It was a steeply graded line which was difficult to build. The passenger trains on it became known as the ‘Coalport Dodgers’. The line closed to passengers in 1952 and closed completely in 1960.

In April 1977 the Silkin Way was opened. It runs for 16 miles from Coalport to the north-west boundary of the designated area and incorporates parts of disused stretches of railway lines and canals including the Coalport branch. It is named after Lewis Silkin who was Minister for Town and Country Planning in the 1945-51 Labour Government and is regarded by many as the ‘father’ of the new towns. It was opened by the then Prime Minister, James Callaghan in the presence of Lewis Silkin’s sons, John and Sam, both prominent Labour Party figures.