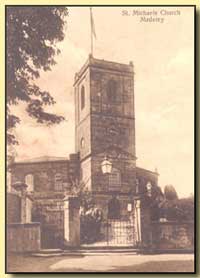 Madeley has been called “The Jerusalem, the Mecca and the Rome of Methodism” and it is in some respects curious that the Fletcher Church is only 150 years old in 1991. The early history of the Methodist Society in Madeley is unique, and from it we learn much about the ways in which Wesleyan Methodism gradually emerged as a separate denomination.

Madeley is best known in church history as the parish of the Revd. John Fletcher.

St Michael’s Church, Madeley [in the 1930s]. Early Methodist meetings were held in the Vicarage Barn (demolished in 1831) with the congregation then attending Anglican services at the church. The barn stood on the other side of the Old Vicarage to the church.

Fletcher was born at Nyon in Switzerland in 1729, migrated to England in 1750, and in 1752 moved to Shropshire as tutor to the Hill family at Tern Hall, the house on the site of the present-day Attingham Park. He was ordained in 1757, and the following day was licensed as curate in the parish of Madeley. He was instituted to the vicarage of Madeley in 1760. He quickly made an impact with the poor, but the farmers and respectable tradesmen suspected that he was a Methodist or Baptist. Congregations increased and by April 1761 the church, then a small medieval building, could scarcely contain those who wished to attend services. Early in his ministry he formed two religious societies in the parish. Such societies, regularly meeting together for prayer and contemplation of religious matters, met in many parishes in the mid-eighteenth century. In 1764 John Wesley paid the first of many visits to Madeley. In 1770 Fletcher went to Italy and France for five months, and between 1777 and 1781 was again abroad, returning to find that the ministry of his curate, Alexander Greaves, had been disappointing, commenting that “a cloud is over my parish”. In November 1781 he married Mary Bosanquet, a pious woman he had known for many years, in the hope that she would help him to revive the religious societies in the parish. In his speech to the Wesleyan Conference in 1784 Fletcher, by that time very ill and in great pain, expressed the hope that after his death Madeley would remain part of a Methodist circuit.

At this time the Wesleyan connexion was a series of linked societies, visited from time to time by the Revd. John Wesley, under the pastoral oversight of itinerant ministers who met at an annual conference. Most members of such societies attended their parish churches, even in places where separate meeting houses had been established. The word “Methodist”, originally a term of derision, came to mean anyone who regarded religion seriously, but was increasingly applied exclusively to Wesley’s followers. In some parishes Anglican clergy encouraged the Methodists, but elsewhere they were regarded with hostility. In 1784 Wesley ordained ministers for service in the newly-independent United States, and act which, perhaps more than any other, set the Wesleyan Connexion on a course which transformed it into a denomination ultimately to be entirely divorced from the Church of England. This process took longer in Madeley than anywhere else.

Fletcher was replaced as incumbent of Madeley by Melville Horne who left the parish of Sierra Leone in January 1792. He allowed Mary Fletcher to remain in the vicarage, and to play a prominent role in the religious life of the parish which continued during the ministry of his successor Samuel Walter. It was during Walter’s time that the new octagonal parish church, designed by Thomas Telford, was consecrated, on Easter Monday, 1797.

From the Vicarage, Mary Fletcher co-operated in a joint ministry with the incumbent of the parish church, and with the ministers of the Wesleyan circuit based in Shrewsbury. Charles Hulbert, the Shropshire historian, regarded her as “the great centre of union between Church and Wesleyans in Shropshire”. From about 1799 she was joined by Mary Tooth, who worked for over 40 years in Madeley as preacher and class leader. The Vicarage Barn, near to the parish church, was fitted up as a meeting house. Mary Fletcher held a prayer meeting there at 9.00 each Sunday morning, the attenders leaving the barn for morning prayer at the church. After lunch, there was a further meeting with readings from Wesley, Whitefield and other authors. Some of those present then went to the afternoon service at St. Michael’s, but others went away in order to attend evening services in their own chapels. At this time there was strong sense of common purpose between Samuel Walter and the Methodists. Hugh Bourne, one of the founders of Primitive Methodism, visited Madeley in 1808 and noted that “for the first time I heard a gospel sermon in the church”. Close links were maintained with Methodist societies within the parish at Coalbrookdale and Madeley Wood, where chapels had been built during Fletcher’s lifetime, and Coalport, where a new chapel was provided by Mary Fletcher in memory of her adopted daughter, Sally Lawrence, who died in 1800.

Signs of dissension began to appear in Madeley shortly before Mary Fletcher’s death in 1815, which were said greatly to have embittered her last days. According to the Revd. William Tranter, a Wesleyan minister who grew up in Madeley, “the Methodists were forced into a state of separation from the Church”, although this was a process which took place over nearly two decades.

In 1815 a new Wesleyan circuit based on Broseley was formed from the old Shrewsbury circuit, which had covered most of Shropshire. The Madeley society was part of the Broseley circuit from the time of its formation. It numbered just over a hundred members in 1815, a total which rose during the early 1820s, but slumped to 79 by 1831. In 1820 the circuit was renamed the Madeley circuit. It was probably the only circuit in the Wesleyan Connexion at that time which took its name from a society which had no permanent chapel. The members of the society came together at the meetings in the Vicarage Barn, from which they went to services at the parish church.

Mary Tooth moved out of the Vicarage in 1816, when she was already contemplating the building of a chapel for the Wesleyan Society. In August of that year Samuel Walter was replaced as curate by George Mortimer. Many decades were to elapse before relations between the Methodists and the Church of England once more became cordial. There were also conflicts within the Methodist Society, and an anonymous letter was circulated, critical of Mary Tooth and rumoured to have been written by John Hodson, the superintendent minister.

Nevertheless for some years Mary Tooth maintained the tradition established by John and Mary Fletcher, and acted almost like a minister with the local Methodist societies, while still attending Anglican services. In 1819 she made arrangements for William Edwards, junior minister to the circuit, to renew membership tickets at Coalport. The state of religious feeling in the parish depended to a great extent on the attitude of the Wesleyan ministers. In 1826 when it was expected that Conference would appoint a certain minister to the circuit, one of Mary Tooth’s correspondents wrote “In him you will indeed have a treasure and once more Church and the Methodists will be as one”.

Dissension centred around several contentious issues. One was Mary Tooth’s role as a preacher. Women were not normally allowed to preach in Wesleyan churches, and in 1828 a respected local preacher was reprimanded by the superintendent minister for arranging for Mary Tooth to fill one of his preaching appointments at Beckbury.

Ill-feeling was caused in 1827 by a proposal to hold Sunday morning services in the Madeley Wood chapel at the same time as morning prayer in the parish church. Members from Madeley Wood had been accustomed to attend Mary Tooth’s meetings in the Vicarage Barn, and to worship afterwards at St. Michael’s.

Another issue was the status of the societies and the buildings they used. In 1831 William Stones, the superintendent minister reminded Mary Tooth that he could only preach at Coalport if he were satisfied that it was indeed a Wesleyan Methodist Chapel.

The old order was thus threatened by an unsympathetic incumbent on one side and by growing Wesleyan concern about practices which seemed increasingly irregular. In 1829 there were reports of strong party feeling in the Madeley circuit. Two years later the Vicarage Barn was demolished, which seems to have provided the final impetus for the building of a Wesleyan chapel in Madeley.

William Orme Foster, proprietor of the Madeley Court Iron Works, presided, and declared the building open. Captain Anstice, speaking of his late brother, said that although he had not been endowed with any extraordinary gifts he rendered to all around him any kindly services that lay within his powers, and had striven to do justly, to love mercy, and walk humbly with his God. When such a man died, although the loss was great to his own family, he would not have thought it possible that a monument such as this would be reared to his memory. Captain Anstice therefore thanked all who had given, both the rich and the far from rich. An institution had been founded which he trusted would be an instrument of good for generations to come by diffusing the light of useful knowledge and strengthening the bonds of mutual sympathy and goodwill among them, and he prayed that the blessing of God may rest upon the work, on those who had been the means of establishing it, on all who from time to time assembled there, on everything that would during all time to come be said or done, designed or executed within its walls. 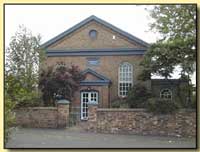 A site in Church Street, within sight of the parish church and the vicarage, was purchased on 13 November 1832. Mary Tooth was clearly distressed by the move and contemplated moving to Norfolk.

After it was opened on 14 August 1833 she continued to hold class meetings in one of her own rooms until her death in 1843. The effect of the opening of the new chapel was to increase membership, which rose from 79 in 1831 to 105 by 1833, and had reached 146 by 1841. From 1835 a Wesleyan minister lived in Madeley. The tiny chapel in Church Street soon proved inadequate, and only eight years after its opening the Wesleyans constructed the much larger chapel in Court Street, capable of holding 500 people, which was named after John Fletcher. Amongst those contributing to the cost of the chapel building were the family of George Ward (great great grandfather of Frank Ward), the Farmers and the Perks. All were chartermasters in Madeley.

When the Primitive Methodist minister John Petty visited Madeley in 1845 the chapel in Church Street was still occasionally used by members of the congregation at Fletcher, but on 28 January 1853 it was conveyed to the Vicar and Church Wardens for use as a school. It served that purpose until the late 1960s, and after a period as a shop, is now a private house.

On 30 March 1851, the day of the religious census, there were morning, afternoon and evening congregations of 336, 105 and 219 at Fletcher, reputedly lower than the average attendances because of special services at a neighbouring chapel. In 1880 the local historian John Randall estimated that the total congregations at Fletcher, Madeley Wood and Coalport exceeded 1500. 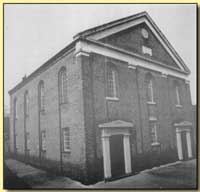 Fletcher Methodist Church in modern times, and the