Madeley Local Studies Group was originally based at the Peoples Centre in Madeley High Street. Built in 1862 as a Primitive Methodist Chapel, the building fell into disuse after the the Methodist congregation moved to Fletcher Memorial Church in Court Street in 1977, remaining unused until 1981 when it was refurbished to become a drop-in centre for the unemployed, with an extra floor being added. In 1987 management of the building was handed over to the local authority, Wrekin (now Telford & Wrekin) Council. The building continues to satisfy some of the needs of the local community, as a home for Impact, Madeley Print Shop and until 2007 the Madeley branch of the Citizens Advice Bureau.

Tenants have included the Young People’s Support Association, Madeley Credit Union, Relate and a Job Club. (Contrary to local legend the basement, now the home of the print shop, was never used as storage place for bodies, but was in fact the chapel Sunday School!)

The building retains many original features, including cast iron window frames and supporting pillars, and in the basement there is a 30 or so foot deep brick lined well below the floorboards, which presumably dates from before the construction of the chapel.

The photo shows Madeley Primitive Methodist Chapel, photographed around the turn of the last century.

We have not been able to find out the purpose of the building being demolished on the left – the massive masonry structure behind the man standing on the wall looks like a baker’s oven. 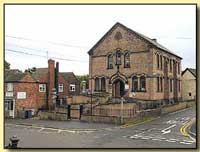 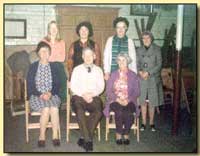 A group photographed in the Chapel basement (used as a Sunday School) in the mid-1970s.

This part of the building is now the home of Madeley Print Shop (the home of this web site). 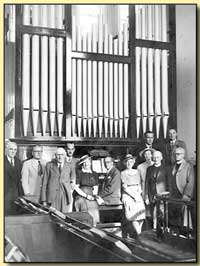 The Chapel organ, photographed (we believe) in the 1950s. It was sited in the rear corner of the building in the area now occupied by the main staircase. The gentleman third from left is William Evison, a local farmer, who donated the land for the building of pithead baths at Madeley’s Kemberton Colliery

A ticket from 1885 for the Annual Tea Meeting, held on New Years Day