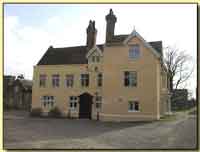 Upper House is one of the many historic buildings still to be found in old Madeley. Situated in Church Street, it is said to have been built around 1621 by Francis Woolfe and is now a Grade 2 listed building. The adjoining barn was also built during the 17th century, and is famous for being the hiding place for King Charles II during his flight after defeat at the Battle of Worcester. During the 18th century it was used as the local market hall.

The land on which Upper House was built appears to have belonged to Much Wenlock Priory during the 13th to 17th centuries and was leased to Francis Woolfe some time before1621 when the house was built by him. We must presume that he managed the property as a farm because he built the barn at around the same time. Francis was very much involved in the mines and ironworks in the area, there is evidence of his involvement in ironworks in Coalbrookdale as early as 1609, he took over the tenancy of the Madeley drift mines in 1651. He died in 1669.

In 1681 his son, also Francis, was granted a new 99 year lease by Basill Brooke (who lived at Madeley Court), who by then appeared to own the estate, for the sum of £500. He lived in the house till his death in 1690, when it seems that the lease was taken over by his son-in-law Francis Heatherley (or Hatherley), remaining in the family’s ownership until 1765. In this year the Hatherleys (as their name was now spelt) used the property as security for a loan of £2,160 from John Smitheman, but it would appear that it was not repaid as in 1774 Smitheman leased the property to William Ferriday and his wife Mary. The property was described as “house, 4 stables, 1 dovehouse, 50 acres of land, 50 acres meadow, 50 acres of pasture and 3 acres of land covered with water”

Upper House as it appeared around 1980

The name “Upper House” appears to have come about because there was a lodge at the lower end of the estate, which became known as “Lower House”.

The Hatherleys appear to suffered financial disaster in 1775, when the tankard and silver plate given to Francis Woolfe by a grateful Charles II was put up for sale and bought by the famous iron master Richard Reynolds.

For a time during the 18th century a regular market was held in the barn, having ceased in the 17th century as the result of a fire which destroyed the original market hall.

In 1816 William Ferriday’s son, also William, inherited the property, by this time major landowners were emerging in Madeley, land was being built on and house rented out on short leases or annual rents. The house and land were leased to William Anstice, the founder of the Madeley Wood Company, in 1822, and in 1824 he leased it on to Rev. John Bartlett, who was married to William Reynolds’ daughter. Bartlett was the founder of the Madeley Parochial Infants’ school in 1828.

By around 1876 the house and land had become the property of George Legge, proprietor of a large and successful brick and tile works at Blists Hill, with the ownership passing to his son William John in 1895. He carried on his father’s business and in his later years became an Alderman of the Borough of Much Wenlock. In 1937 he died without leaving an heir and the property passed to George-son-in-law’s children, William Dyas and Ann Boulton. For a while it was tenanted by, including others, it is said, two German scientists fleeing the Nazi regime in Germany. 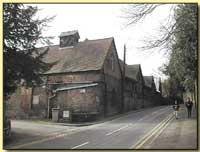 Upper House Barn (“The King Charles Barn”) as it is locally known, in need of serious renovation from its sadly neglected state in March 2000.

By 1941 it had become the property of something called “The Harley Trust (Madeley)” who remained the title owners until it was purchased by Telford Development Corporation in April 1966.

During the ownership by the Trust it was leased to the Coventry Gauge and Tool Co. who set up a branch factory in the barn, with their manager, Mr Arthur Lee, living in the house from November 1941 to April 1961.

Upon acquisition by the new town development corporation the house was converted to accommodate their Social Development staff, with offices being let to the Women’s Royal Voluntary Service, St. John’s Ambulance Brigade and Shropshire County Council Social Services Department.

At this time a Scout Hut was built in the grounds and the barns were vacated by the Coventry Gauge and Tool Co. (who moved to a nearby purpose-built factory), their place being taken by a small company building bicycle frames.

By 1970 the house had been taken over by the Corporation’s Housing Department, upon their departure in 1976 it became the Magistrates Court of the Wenlock Bench, covering the South Telford area.

With reorganisation of the local courts in 1986 the house again became vacant, then in 1988 it became the offices of a company of Chartered Quantity Surveyors (Cyril Orchard and Partners, who produced the booklet that was the source for most of the information on this page).

By the mid 1990s it had become the offices of the Social Services Mental Health Service, which is its current use. The Barns and the surrounding site are currently in a very poor state of repair, and are the subject of a planning permission for conversion into luxury apartments……only time will tell if they will be allowed to continue to deteriorate.