This article was written by Gwen Groves (nee Dallow), a member of the Local Studies Group.

I was born in Coronation Crescent, Madeley, long before Telford New Town was ever thought about, and these are my happy childhood memories:

The Madeley I knew as a child was a warm, friendly little town. Everyone knew everyone else, I suppose gossip prevailed, but genuine interest was always apparent.

We had our own railway station – Madeley Market, where you could take a train to Wellington, calling at various stations en route. Alternatively the short journey in the opposite direction would take you to Coalport. That was the direction I preferred because it usually meant I was going to Swinney Cliff for a picnic, paddling was also enjoyed in the shallow part of the River Severn. We called the train “The Coalport Dodger”, oh how it got up steam on the way up the bank out of Coalport on the return journey!

My father told me the great joy he had as a boy when he was given a threepenny joey (a silver threepence). He used it to treat himself and a friend to a ride on the train as far as Oakengates. They had to walk back home, not having enough money for the return journey.

It was a sad day for Madeley when “The Dodger” made its last run to Wellington (in 1952, the tracks were finally lifted after the end of freight services in 1960), carrying passengers dressed in costumes from earlier days. Later the tracks were taken up and the Silkin Way footpath now follows the same route.

I went to the old Church of England school in Madeley. First I attended the infants school (in Church Street, now a private residence) and then transferred to the junior school. I don’t remember a lot about the infants school except that Miss Ravenscroft was Head Mistress. She taught the top class where we had regular spelling tests and I was quite proud of myself as I received a fair number of gold stars! I also remember that we had a school band and I always used to hurry when the instruments were unpacked as I always wanted to have some black “clappers”. Some were plain brown wooden ones but about two sets were black and shiny and these I loved. 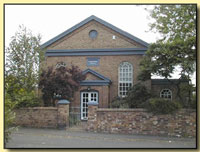 Gwen’s first school – Madeley Church of England Infant School in Church Street. Opened in 1833 as Madeley’s first Methodist Chapel, it soon proved to small for the growing congregation and in 1853 it was handed over to the church for use as a school, which it remained until the late 1960s. Nowadays it is a private residence.

The junior school was opposite St. Michael’s Church. Standard One was on the ground floor together with the school hall and the canteen. The other three standards were all upstairs. Each classroom had a big open fireplace with a lovely fire burning during the winter time. Milk used to be served during morning playtime and during the winter crates of milk bottles used to be placed by the fire so that the frozen milk thawed in time for us to drink. The midday meal was cooked in the school kitchen and at twelve we all assembled in the canteen, lined up and taking an empty plate we went along the row of serving ladies to collect our meals. The only snag was that you HAD to have some of everything, and you HAD to eat it!! If you didn’t eat everything you had to sit with your dinner until it was time for afternoon lessons to begin. One crafty trick was to wait until no-one was looking and then put your plate (and unwanted contents) on the bottom of the pile of dirty plates. I often wondered what the washing up ladies thought when they discovered such a treat in their washing up water.

While I was at the school the teachers were Standard One, Mrs Purcell; Standard Two, Miss Gough; Standard Three, Mrs Groves and Standard Four was taught by Mr Simpson, who was Headmaster. When my parents attended the school they were taught separately, with the girls’ classrooms on the top floor. The school yards were small, one for boys and one for girls. I remember we used to have lovely times when country dancing was taught by Mrs Groves. I was also a member of the school choir and each year we went to a Festival of Singing which was held at Donnington Garrison Theatre. This was really enjoyable. It was interesting to hear all the other choirs sing, especially our rivals from Madeley Wesleyan School, who we called “Wesleyan Bugs”! Not nice I know, but they in turn referred to us as “Church Bugs”!

When we had our games lessons we had to form a two by two crocodile and walk a little way down Coalport Road to a playing area simply known to us as “the back of the Church”. There we would play rounders. We also used this area some lunchtimes simply for indulging in whatever games we fancied. Various little groups would form and play “pretend families”, and there were various skipping and hopscotch activities too.

Some lunchtimes we used to walk to the top of Madeley to a grocers shop – Harper’s. There we could have a large packet of “Kai-li” for tuppence. If we were especially well off we could have “Deluxe Kai-li” for threepence. We would spend the rest of the day with one pink or yellow finger that we had used to dip into the divine substance and afterwards LICK!! The journey from school to Harper’s had taken us around the turning, past the Coventry Gauge factory and then over the Fair Field at the back of Poole’s house (this field is now occupied by the houses and flats of “Mayfield”). We then passed Brown’s chip shop (now “Andy’s Fish Bar”), up Park Street to Harper’s, which was at the top by the Park Inn.

One of the decorated lorries in the 1951 Madeley Carnival, outside the Hall Barn in Church Street. The author of this page, Gwen Groves, is the girl seated on the left.

We used to have wonderful carnival celebrations in Madeley each summer. Long processions of adults and children in fancy dress followed the Carnival Queen and her attendants. The whole procession was led by the Madeley Silver Band, and there were always several lorries decorated and filled with groups of adults and children, usually depicting some topical event. There was always a good turnout because in those days everyone knew everyone else and wanted to who was dressed up. Can anyone remember any Madeley Carnival Queens, or other details of the Carnival (especially photos)? 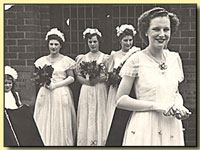 Our first Carnival Queen photo – Mary Bowen, in 1951. The photo was taken outside the original Old People’s Rest Room in Park Avenue. Let us know if you recognise any of her attendants.

Madeley once boasted a very popular cinema. Click here to read Gwen’s memories of the silver screen in Madeley.