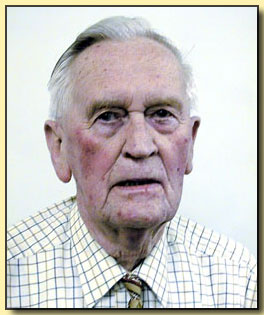 You may have already read some of Jack’s memories of Madeley elsewhere in this web site, here he tells the fascinating story of his life, from his birth in Madeley over 80 years ago, through his working life in the pit .

Jack is one of the founder members of Madeley Local Studies Group (and despite his age one of the most active!). In the Study Group we have a saying when someone needs more information on a particular topic – “Ask Jack” – he always seems to know the answer, or comes back with it within a few days.

All italics in brackets are editor’s additions.

I was born at 11 Bridle Road, Madeley on 12 July 1920. The road was known as ‘the Clod Piece’. My father was Howard Wilberforce and my mother Harriet Mary. I was the second son and fifth child.

The house was semi-detached with two bedrooms and a large living room with a passage to the rear with a pantry on one side and a coal house under the stairs on the other. We had a long garden and there was an earth toilet up the garden. A common wash-house was shared between us and next door. A cast iron boiler was used for clothes washing. The water was fetched in buckets from a tap in the road. All used water ran down the side of the house into an open drain in the road.

We always had good fires. Dad, having been apprenticed as a blacksmith, had to go into the pits and was a coalface worker, and he received an allowance of coal to dry his working clothes.

Above us lived an uncle and aunt of my mother. They had many apple trees and it was my job to go up their garden and gather apples. Their son, George, encouraged me to smoke and swear.

My earliest recollection was getting a leather football at the age of about three. It was delivered at the door by one of the sons of Wards, who had a shoe shop in Park Street. Dad went to the door and paid for it – two shillings and eleven pence. It was great to play football in the passage, previously Mother had made balls from old socks.

When I was five years old I was taken to the Church of England Infants School in Church Street. The school consisted of one large room and a narrow room at the back of the building. This is where I went. I did not like it and I would come back home. To get me to school I was put on the horse which Gough the baker kept in a field in Bridle Road. I still came home. Eventually I settled. We had slates and chalks in that class. We had times during the day when we put our hands on the desk and then put our foreheads on to them for a rest period.

The big room had a large stove which used coke. A guard prevented us from getting too near. That was the only heating. A big occasion was a concert in the Anstice Hall when I recited ‘Tom, Tom the piper’s son’.

At the age of seven I went to the big school – the Church of England Senior School (opposite the Old Vicarage in Church Street). About that time we moved to 50 Court Street. Court Street was a dirt road then and in dry weather the council sent a corrugated tank which had holes in and when moved the tank went round and water came out onto the road. Court Street was used by coal hauliers (‘Jaggers’). To get your allowance of coal from the pit you had to pay for delivery. Several men did this using horses and carts and you picked who you wanted to deliver. These jaggers would go to the landsale siding where so many trucks were allocated for workmen’s coal. When they had what they estimated was the right amount they went to the landsale weighbridge, which was 25 yards from the Halesfield winding engine. If they had too much it would be shoveled off, if not enough any coal around the weighbridge would be thrown on. Then they drove down the pit lane to the Bridgnorth Road, then right at the bottom, proceed 100 yards, turn left and into Gypsy Lane, under two bridges into the Court House side of Court Street. Some coal was delivered as far as Broseley. Oakengates etc.

Our house in Court Street was a two bedroomed cottage with a living room and a kitchen cum dining room. Cooking was done on the old type Dale range with an oven on one side of the fire and two hobs. The washhouse or brewhouse, as it was commonly known, was by the back door and the earth toilet just around the corner. A long garden ran up to the recreation ground. It belonged to the Miners’ Welfare and had a football pitch, three tennis courts, two dressing rooms and three showers in the gents’ changing room. The hot water was supplied by a coal-fired boiler.

School was no problem and I was able to play for the school first team at football. Each year we had a day school anniversary in the parish church. We sang well known choral type music. The whole school was seated in the gallery and we were conducted by the headmaster, Mr HR Shaw, a strict disciplinarian and great teacher. The school had one piano but we were taught music by the head who played the flute and piccolo. School hours were 8.30am until 4.00pm with 15 minutes break in the morning and 12 noon until 1.30pm for dinner time. All went home then except those who had walked a long distance to school. They brought lunch with them, most likely jam sandwiches.

A lot, if not all people were poor. I remember a man coming from the parish relief to our school asking whose boots had holes in. Many had boots not fit to be worn. These lads received a note to get a new pair from a certain shop. If you were eating an apple, someone would ask you to keep the core for them.

We were fortunate that my grandparents on my mother’s side kept public houses such as the Nelson, Miners’ Arms and Red Lion and Grandma Gainham was a great worker with the needle and cotton. She made trousers, the short ones, and always sewed a copper or two in the pocket.

The Smarts had been known for their musical ability. Grandfather William and two brothers, John and James, with other members, had a small orchestra and the three brothers shared three churches where they played the organ, visiting a different church each week. So living in Court Street we were able to have a piano.

I had piano lessons from Billy Youden, who was a brilliant musician. Practising was my problem because I liked football so much that after my dinner I would pop over the wall on to the Rec. and play until it was time to go back to school. When I was 12 years old I broke my left arm playing football. I jumped for the ball and fell on my arm. Dad was able to get a ‘recommend’ so that I could get hospital treatment free. A recommend was a certificate from the Union which was handed in to the Royal Infirmary, Shrewsbury, to say I could have free treatment because father contributed to a hospital treatment scheme: he paid about threepence a week.

The Church of England School had been built in 1844 and boys and girls attended. The girls were on the top floor and the boys on the ground floor. We were completely segregated. The girls had a small playground and we had the larger one. Behind the parish church was a bigger play area and when we could we played football on that and the girls played netball. At the morning break one could buy a cup of Horlicks for a penny.

The year I left school I played in the final of the Broseley Hospital Cup. We lost 4 – 1: I still have the losers’ medal. I received two prizes when I left. The Lady Yates Special Prize, an attache case and a book on animals and fish. That school turned out pupils who had received a wonderful basic education which fitted them up for the future.

I also went to Sunday School from the age of about five years, mornings and afternoons. I was 15 years old when I finished in Sunday School.