Back Down the Pit 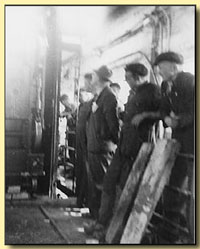 The scene in 1952 as one of the new diesel locomotives is lowered down the shaft at Kemberton Colliery. The man wearing a Trilby hat is the manager, William Cain. Click here to read his daughter, Brenda’s, memories of Madeley

I reported to Kemberton Pit early in 1946 and soon got back into the rhythm of the job. I was doing one week on afternoons and four weeks of days. How I hated that afternoon shift – 1.30 – 10.30pm working anywhere that a breakdown occurred, surface or underground. I have run up to the Top Coal about a mile and a quarter from the pit bottom and come up onto the surface and rushed to a breakdown at the screens. Albert Evans and I did most of the big jobs on the surface, Albert had also been in the RAF during the war.

On 1st January 1947 the coal industry was nationalised. It allowed one to have a similar wage throughout the industry. Beforehand each company paid just what they thought. It was all out for coal, the country was desperate. They even had a production shift on a Saturday afternoon for a time. In the late 1940s coal was so short that dozens of people came picking off the (waste) tips – even lorries came. It was an offence but everyone turned a blind eye to it. Sometimes they would get some good coal that had been in a tub of rock.

I worked seven days a week and it was not until nationalisation that we had a week’s paid holiday. I well remember that first holiday. On the Saturday morning at the commencement of the holiday one of the beams of the wooden headgear had become rotten so we were changing that at the same time as the sump at the pit bottom was being cleaned out. As the morning wore on the signal came from the pit bottom to lower the cage. Immediately one of our chaps went into the winding engine house to tell the engineman not to move the cage until we gave the order. After about ten minutes we told him to lower the cage, which he did. Immediately the phone rang to say that we had dropped the cage on top of Percy Harris. He standing on baulks in the sump lowering a bucket, just as he bent over the cage sat on him. Percy was very badly injured, including a broken pelvis, ribs, legs, thighs etc. He was rushed to the orthopaedic hospital at Gobowen. He survived and after about a year came back to work in the pit head baths. He was a big fellow and only the fat on him helped to save his life.

We did massive alterations to the pit head gear, eventually having four deck cages. Before compressed air rams came along empty tubs were pushed on to the cage by hand – I remember Seth Corbett pushing a tub on with his hands on the top edge. Just as he pushed it on the cage slipped off the keps mechanism (on which the cage sat at the top of the shaft) pinning his hands between the top of the tub and a cage deck. He did not know what had happened until his gloves were removed. The fingers on both hands had gone leaving him with just a thumb on each hand.

In the 1950s I walked by a visiting Inspector of Mines who was doing some experiments with the Safety Officer, Bert Aldred. I made some remark and the Inspector said ” Explain that”. It was not easy to explain but I did and for the next six years I worked part-time with the Inspector, Mr J.V. Spence, who was Special Duties Inspector for the Midlands. We worked and experimented to try and prevent men from getting pneumoconiosis. I worked on the principle of a venturi creating a suction and over they ears we were able to catch hold of the dust, keeping it away from men and machinery. The biggest problem was to kill the dust – we even tried using washing up liquid.

I went to several collieries on Cannock Chase with Mr Spence. He would ring up the lamp office just after 7am to tell me he was coming that day. All this was a sideline to my normal work. Through Mr Spence I came to know many people.

The headgear frame had to be replaced with steel. A contracting company did the erection but we did not lose any production. I went to work on a Friday night when we removed the existing pulley on the inside shaft and put it on the new frames. I did the new bearings and the lining up. There was no time to scrape bearings – just hope for the best.

The main roads in the pit were enlarged into locomotive roads, whitewashed and lit with fluorescent tubes every few yards. Once this was done we had three diesel locomotives delivered. To get these underground was a job, the shaft only being 8ft diameter. So we had to remove everything that protruded from the locos, even the wheels, removing a cage deck and lowering them into the cage. At the pit bottom a bogey was ready accept the locos. We lowered the three on the Saturday morning. Afterwards the deck had to be replaced.

The return airways needed to be enlarged and a new fan was installed. A man came from the firm, he stayed a day. I built it with the aid of two mechanical apprentices.

The engineer was Reg Cartwright. He was a powerful strong man who had been used to working and he liked nothing better than putting on a pair of overalls and working. Reg and I were good friends.

I spent many an hour doing paperwork that came in regularly from Area. The Board introduced a ‘Kardex’ system of planned maintenance. I worked out the time it would take to make an inspection of every piece of equipment; in some cases daily examination, in others weekly, monthly, quarterly, 6 monthly and yearly. Such things as the winding engine, shafts, the ropes, headgear pulleys, and the main fan had daily inspections. In fact the Coal Mines Acts stated that the inspection had to be carried out before anyone could go underground. I had the job of inspecting the winding engines, headgear pulleys and bearings at Kemberton and Halesfield and the main fan. Every day, seven days a week, even on Christmas Day, I went into that fan and examined it and the other equipment. I signed a legal document and if anything unforeseen had happened my conscience would have been clear.

The fan had an airlock and to get inside to check the bearings I had to call upon the electrician, or if he didn’t come to Halesfield with me the winding engineman to help open the first set of doors. I was able to poen the inside door on my own. Once inside it was damp and smelly, and I had to walk through water to reach the bearings on the other side. To get out I had to hit the door and open a shutter as I pushed on the door to get out.

When the pits had two weeks holiday in August the few remaining ponies were brought, and to start with a bandage was placed over their eyes because of the bright light, which they had not been used to.

In 1961 a vacancy occurred for a training instructor. Mr Tullett, the colliery manager, invited me to have the job. I accepted because with mechanisation trainees needed to know about the new dangers involved. I commenced in the August and within a few weeks I was asked by Area if I would go to Baggeridge Colliery (Gornal) and instruct the electrical and mechanical apprentices from all the pits in the area. I worked with John Onions, the other instructor, showing the apprentices how to use lathes, shapers, millers, drilling machines and hand tools. I enjoyed that.

One day the Area General Manager came to the Training Centre with the Area Training Officer. As soon as he walked in he saw me and turned to the ATO. “I see you’ve got Jack Smart here”. Everyone quaked in their boots when he was around: managers, group managers etc., all were frightened of him.

The Kemberton pit van took the apprentices from Granville and Kemberton pits, so I sat alongside the driver. If the van did not need to go I went in my car. After about 12 or 13 months, the Area needed an electrical instructor so I went back to Kemberton. I did quite a lot of lecturing on all aspects of mining and first aid, I also went to Cannock for a week’s course on instructing.

During my time at Kemberton I knew of many fatalities, from a young mechanical apprentice caught in a Trepan-Shearer (a type of coal cutting machine) to the last fatality in 1966 – Ernest Skelton of Broseley. During one period of six weeks three men lost their lives. Before I started work I also remember J Edwards (1928), B Tisdale, W Tisdale and J Hesketh being killed.