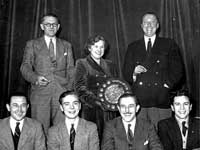 The Madeley Amateur Dramatic Society was an elite organisation and membership was considered a privilege. Some members came from as far afield as Wolverhampton. Performances were always of a very high standard and local people looked forward to them as special occasions – Daphne Roberts (later a member of the group) remembers walking from Aqueduct to the Anstice in Madeley to attend performances when she was a little girl.

The group was founded in 1943 when Dorothy Bryan called a meeting which attracted just five people. The first production was Distinguished Gathering in March 1944 (programmes 3d each). By 1948 there were 33 acting members and many willing helpers. Admission to the group was strictly controlled – applicants had to be proposed and seconded by existing group members, there was a 10/6 ‘entrance fee’ and an annual subscription of 5/-. However, the group was flourishing and, in that year, organised a Valentine’s Ball and a Social Evening to celebrate Princess Elizabeth’s wedding. The funds raised enabled the group to donate £50 to the Mayor of Wenlock’s Flood Relief Fund and £134 to the Orthopaedic Hospital. Group members also attended a weekend drama school in Horsehay.

The following year saw an increase to 41 members and the group entered their production of Pygmalion to the Shropshire Festival of Drama where their performance was described as “a brilliant achievement” by one of the judges. At this time productions took place at the Anstice Memorial Hall but the possibility was raised that a local building could be leased to provide a proper theatre.

By 1950 two productions a year were being achieved. A group logo, palma non sine pulvere (no reward without effort) was devised by a designer, Josephine Reese and the election of three fifteen-year-olds provided a welcome influx of youthful talent. The group began to campaign for wider public support and proclaimed in their annual report “this society has always aimed at providing Good Theatre for a district otherwise starved of drama”.

Three years later funds were raised to improve the stage at the Anstice Memorial Hall and it is clear that a punishing schedule of rehearsals took place for each production with up to five days a week being devoted to these during the 6 – 7 week run-up to each production. No effort or expense was spared and, on at least one occasion, costumes were hired from Stratford.

Visits to other theatres and productions were organised on a regular basis and the group continued to enjoy success in drama festivals and at other events.

Lady Forester became President in 1957 and continued in that rôle until the mid 1960s when Mr. Cramp took over, followed by his widow after Mr. Cramp’s death early in 1967.

By 1956 fundraising was a major issue and members were being asked to pay for their own books and each to give the Secretary six stamped addressed postcards to save group funds. Membership was declining and a drive for new blood needed. Things seemed to be improving in the following year but collection of subscriptions continued to be a problem. In 1958 concerns were expressed about the cost of hiring the Anstice for productions, the cost of hiring rehearsal rooms and the expense of photographs. It was proposed that both rehearsals and future productions should be moved to Madeley Modern School (now the Abraham Darby School). It was not uncommon for Mrs Bryan’s house to be denuded of furniture for the duration of a play!

In the late 1950s and early 1960s the society experienced mixed fortunes. Several plays had to be cancelled (partly for lack of a suitable hall) but success in Festivals continued with the group winning the Shropshire Drama Festival for the sixth time in 1960. In 1961 the Anstice Memorial Hall requested that all equipment belonging to the society be removed whereupon it was shifted to the Malthouse (formerly on Malthouse Bank in Park Street).

By 1962 the group had been in existence for nearly 20 years and, despite a sometimes depressing lack of support, a performance of Esther (the group’s first play for three years) was a great success. Nevertheless, the following year, there was a discussion over the future of the society but members decided to carry on. The 1964 production of Playbill proved expensive with costs of £97 limiting profit to only £47 although donations were still given to the Darby & Joan Club and the Flatlets. Much of the cost stemmed from the printing of tickets, posters and handbills. There were three different ticket prices (5/-, 3/6 and 2/6). In 1966 these were reduced to two and it was decided that only 5/- tickets should be printed with the cheaper 3/6 tickets for the rear seats being available on the door.

In 1967 the society received a blow when the head of the Abraham Darby School wrote to say that, starting in 1968, they would be restricted to just one production a year and that it would not be possible to hire the hall in 1968 until the second half of the year. This meant that the spring production would have to be cancelled and was particularly galling as 1968 was the year of the society’s Silver Jubilee 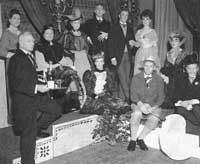 In 1968 the group still hoped to acquire its own premises and serious consideration was given to purchasing the lease of the former Madeley Infants School in Church Street. Generous personal donations were made by several committee members, all members were asked to give what they could and, at one time, the group sold ‘bricks’ for £1 each to raise funds. However, it soon became apparent that the funds required for the purchase and for subsequent work to make the building suitable for use as a theatre would be beyond the capacity of the group – donated moneys were returned and the idea abandoned.

This was the year of the Society’s Silver Jubilee and the group celebrated with a performance of Murder in the Cathedral at Madeley Parish Church and with a Jubilee Dinner held at the Forest Glen restaurant and attended by around 100 members and friends.

The 1969 AGM was held at the John Fletcher School and, although some members were still seeking ways to ensure the future of the group it was becoming clear that many felt the time had come to wind it up. Despite attempts, over the next two years to revive the fortunes of the Amateur Dramatic Society it continued to decline.

A General Meeting took place on 11th January 1972 at which long-time members including Mr. Arnold and Miss Ravenscroft argued that the group had outlived its usefulness and should be wound up before its finances dwindled away. Mr Arnold pointed out that, with one exception, the last four plays produced had made a loss. Some members felt that the group could survive if it was prepared to move with the times but a resolution that it be wound up was carried by the meeting.

A winding-up meeting of the Executive Committee was held at Mrs Cramp’s house on 7th February 1972 with a view to deciding on disposal of the society’s assets. On 30th June that year the ‘final curtain’ fell when a cheque for £475 was presented to the Ironbridge Gorge Museum Trust and the Madeley Amateur Dramatic Society passed into history. 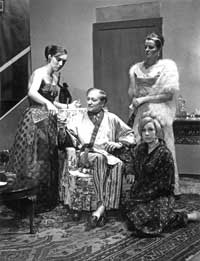 The group had enjoyed a long and varied run as part of Madeley life. Undoubtedly the driving force behind its setting up and development was the redoubtable Dorothy Brian, a former Madeley teacher, who remained formidable to the end of her days – only learning to drive when widowed at the age of 68! Dorothy was senior producer between 1952 and 1965 and set the standard for high quality productions. The wonderful set design was largely the work of Jo Reece (now Mrs Withers).

Among its early players and supporters were Mr & Mrs Arnold, Mr & Mrs Cramp, Miss Ravenscroft, Dr. (John) Metcalf and Edgar Harrison. Villiers Chilcott, John Derry, Maurice Finney, Bob Staunton and Percy Tranter played their part as did many others. Later recruits included Martin Brookes, Ron Miles and Lenny and Daphne Roberts but many Madeley residents contributed in one way or another (not always willingly – at least one former resident of mature years has told me how he and his friends were plucked from the Boy Scouts to perform as somewhat reluctant Roman soldiers in Caesar’s Friend!).