This aerial photo of the bottom end of Madeley High Street, believed to date from some time in the early 1970s, but we can’t afford to hire a helicopter! Some clues to the age of the photo are the footbridge (bottom right) and Parkway (top right) which were built in 1969; the old telephone exchange (top left) which was replaced by the much larger current building off Parkway circa 1975, and the coach house to the rear of the Royal Oak pub (centre) demolished some time in the 70s.

There have been many changes since the photo was taken, including the conversion of the old Methodist Chapel (left foreground) into a community building (the home of this web site!). The former County Court (immediately behind the red bus) is now being converted into a music and community centre, and is also the home of the Telford Amateur Boxing Club. The bus itself would now be going the wrong way – the High Street has been a one way street since the early 1990s. 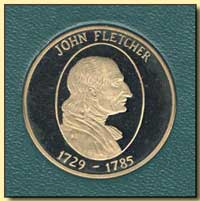 One of Madeley’s most famous (adopted) sons, John William Fletcher, Vicar of Madeley. This medal was struck by the Ironbridge Gorge Museum Trust to commemorate the important part played by Fletcher in the history of the area, and his importance to early Methodism

Click here to find why Madeley was once described as “The Jerusalem, the Mecca and the Rome of Methodism” 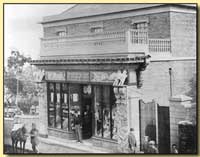 This photo of Bryan’s drapery shop at the top of High Street is believed to date from around 1870, making it the earliest known photo of Madeley. Given the incredibly long exposures needed in those days it must have been specially posed.

The building has changed relatively little over the last 100 years, the main part of the building is now the Madeley branch of Lloyds’ Bank, which was previously housed in the Anstice Memorial Institute.

This photo, taken in June 1911, shows a Bleriot monoplane belonging to a Mr Valentine, that made a forced landing at Sutton Hill, Madeley, somewhere in the Stanwyck, Stebbings & Singleton area of the modern housing estate.

Newbrooks, who owned the nursery opposite the Six Bells in Church Street (and the little shop adjoining the pub) had a coach and pair that they hired out for weddings etc, (I’m sure the manure came in useful for the nursery!)

Another Madeley first, the Rest Room was the first in Britain, and as far as we know, the first in the world, to have its own premises. 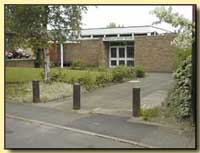 The Rest Room, and much else in Madeley, was the result of the tireless efforts of Robert Moore, a local businessman who devoted much of his life to the benefit of the local community and especially the elderly.

This photo (believed to date from the 1930’s) shows the upcast (ventilation shaft) at the Madeley Wood Colliery. 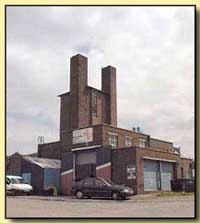 There are no visible remains of the pithead, but this modern (June 2000) photo shows the boiler house end of the former pithead baths, now used as light industrial workshops, in the middle of the Halesfield industrial estate.

Click here to find out more about Madeley Wood Pit

This old hand tinted postcard (postmarked 1905) shows the old Three Horseshoes pub in Madeley Market Square (opposite the shops in the previous front page photo). It was the largest pub in Madeley, and was the headquarters of the Madeley Band. 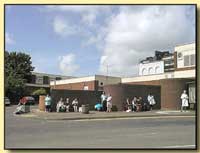 The same scene today (July 1999) showing the attractive(?) 1960’s architecture of Madeley Shopping Centre, at the junction of High Street and Court Street.

The end elevation of the Anstice Memorial Institute is visible just right of centre, somewhat marred by modern ventilation plant on the roof.

Our photo shows the old Market Square in Madeley, at the junction of Church Street and Park Avenue.

The site is now occupied by public toilets. 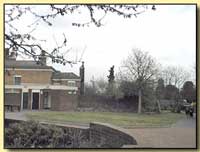