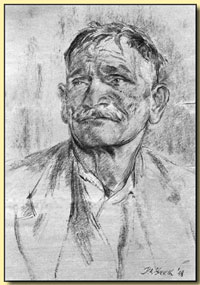 Sam Cookson, from a colour pastel drawing by H.A. Freeth.

The following article appeared in “Coal” (the magazine of the old National Coal Board) for October 1948. It was number 18 in the ‘Pit Profile’ series, written and illustrated by H.A. Freeth. The subject was Samuel Cookson, father of the late chairman of Kemberton Pit, Madeley Wood, when he was thirty-three in 1911, and he has been shotfiring there ever since. [written 1948]. Listen to his story in more or less his own words.

“I was born, the son of a colliery fireman, in 1878, in Park Lane, Madeley. There were fourteen of us in a family of eight boys and six girls. As a boy I went to Madeley Church School, where I had to pay my toll of 2d. a week. (If you didn’t pay it you had to stand in a line at the front of the class.)” 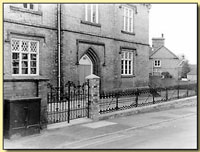 Sam’s old school, the Church of England National School in Church Street, opposite St Michael’s Church and the Old Vicarage.

After standing derelict for some years it is now a residential home for adults with learning difficulties.

“I had very little schooling. I just went when Mother let me. She learned me to make bread at her knee. She thought learning to make bread more important than doing sums. (With all this education today everyone soon will be stinking with pride – and where shall we get our workers from then?)

I left the Church School and went to a private school – that was also 2d. a week. It was only a room in which twelve of us were taught by an old maid. I left school at ten and went on to a farm as a help-boy, learning milking and feeding the pigs, working from 6 a.m. to 6 p.m. for 6d. a day.

When I was two days over fourteen I came into the pits, at Halesfield Colliery. You remember where I undressed me in that shack? That was where we all came for snap – you can still see the bottle holes in the wall.”

(Part of Sam’s job is inspecting the airway which runs now from Kemberton Pit to Halesfield; hence he changes clothes in a shack at Halesfield and walks underground to work, not using the pit-head baths at Kemberton.)

The upcast (ventilation) shaft with wooden headgear at Halesfield Colliery. This photo was taken in the 1980s. Click the photo to enlarge it.

“The shaft there, that’s the first shaft as ever I went down.” (And a primitive looking structure the headgear is, the sort a boy could make a perfect model of with four wooden blocks and a pulley-wheel.) “There used to be about thirty women picking ironstone on the surface on the site there. There were twelve furnaces round here within a radius of five miles, but there have been none now since 1912.”

The pits were first made for both ironstone and coal, and from these hills they dropped the coal down to smelt the iron that made the first metal bridge to go over the River Severn – I believe the first one in the country – at Ironbridge: and these pits were the first to have iron rails for the tubs.

At Halesfield there were between thirty and forty men and boys. I went straight underground and worked on a wheel pump for six months for 10d. a day – from that to driving for 11d. a day. For 11d. in those days you could buy a pound of cheese, half a pound of margarine, and a loaf of bread.

When I was eighteen I had a dispute with the manager. I wanted to get a ‘manney’s wage’ – if you understand me – and the manager wouldn’t hear of it. So I said ‘I’m going somewhere where I can get another shilling a day,’ and I transferred to the Meadow Pit (at the back of the cricket ground in Park Street), from there to Tom Rose Pit (an old shallower pit near to Halesfield, named after the charter master), and then I got back to Kemberton.

In 1910 the Hearst coal-cutters came along and I was practically the first to use them. In November 1910 I started to keep a record of everything that happened in the pit in this little cash-book: it contains particulars of work and wages from that day to this.

Take a look at it: 4 Dec. 1910 – accident at pit – no cutting until 13th.” (In this tragic accident the rope broke and the cage with seven men in it crashed to a tangled mess at pit bottom.)

April 26. Birmingham University for First Aid Test. (That day was the last day I ever saw a golden sovereign on the ground.)

18 Oct. 1913. Deduction 1s. for colliery disaster funds, Wales. (In this disaster, the worst in the history of British mining, 439 men died in an explosion at the Universal Colliery, Senghenydd, Mid Glamorgan.)
27 Oct. 1913. Fred Ward died in rescue apparatus during exercise. (I’ll never forget that day as long as I live.)

And so it goes on. This little book shows the ups and downs. You had to take the good with the bad. I got married on my twenty-first birthday on 3s. 9d. a day. My wife had worked in Coalport China Works since she was fourteen and after we were married we both worked and worked until our home was paid off, and then I said, “You can give that up now – we’ll make a show of it, don’t worrit.”

The first piece of china my wife painted – the famous Coalport Indian Tree pattern – went to her elder brother. Pace was the name, Thomas Pace, who became Mayor of Shrewsbury.

In 1906 I averaged 5s. a week for over six months and kept a wife and two children on that. Many’s the time I’ve sat down to a dinner of two or three taters with nothing on them.

My wife died in 1925 and I married again eleven years ago. I’m just over seventy and I’ve all my own teeth. The top ‘row’ (Sam bares his one remaining front top tooth in a smile) look pretty comical now, but I’ve no false ones.”

Uncle Sam carries his age well. He is as regular as a clock and the model of a keen and conscientious deputy. He has never had a fatality among the men under his care – the worst case has been a dislocated shoulder. He likes to remember that in 1929 he won a £5 prize for being in charge of the district with the fewest accidents.