This letter, the photos and documents were brought in by Gwen Groves, a member of the Study Group and niece of Reg and Syd Oliver, the author and recipient of the letter. 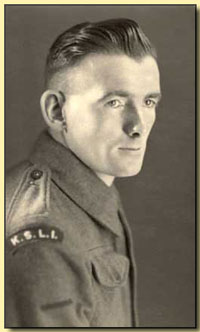 A photo of Reg taken by a Wellington photographer, before he left for war. (No larger version).

Reg was born in Station Road Madeley, later living in Court St and Ironbridge Road. He was the 9th child in a family of 14.

He was very involved in the local Scout Movement and while at camp in Conway he met his future wife Sally. They married in 1942. Shortly after this he was called up and joined the K.S.L.I. (King’s Shropshire Light Infantry).

After his war service, (although suffering badly with his back), he allowed himself to be demobbed as A1. One of his main reasons was to have no further delay in seeing his son Michael for the first time (he was two and a half years old by this time). Because he was demobbed A1 he was never able to obtain a war pension, although he always suffered badly with the shrapnel fragments which were still in his back. He worked as a core-maker at Court Works, Madeley, and although quiet was a good workmate. He lived in Prince Street and finally in Coronation Crescent.

The letter you are about to read was written (on a cramped air letter) to his brother Syd (who later became a well known Madeley postman). Fortunately Syd kept the letter and returned it to Reg in later years. 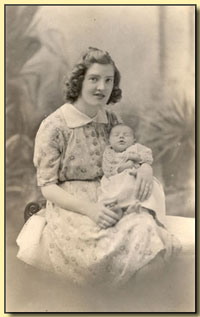 Our photo shows Reg’s wife Sally with their young son Michael, who he didn’t see until he was two and a half years old.

Many thanks for your letter of the last day of last month, I got it today, been following me around see. You’d like to know what it’s like in action. And also what it was like when we struck those mines, well I’ll tell you on one condition and that is that you don’t let Mother or Sal read this letter.

I’ve been in action again since I got back, up in the mountains again and Syd, it’s bloody awful, that’s the only way to describe it. I joined the lads up there a week last Sunday night and they had already been in a week then. We came out last Saturday night the 25th. In a couple of days time we shall be up there again. I went up there with the mule train, it’s all mules now Syd, impossible to get vehicles up there, the roads and tracks are just a sea of mud.

As luck would have it Jerry was quiet so I got up without any mishap and joined C Coy (Company) in a battered old house. The line where we where Syd is shaped almost like a horseshoe, and we right forward, what they call the spearhead, so you can see Jerry practically all around us and boy did he sling some shit at us. It’s what they call static warfare now up there, neither side budging an inch, so all you do is just sentries at night, man forward positions, then in the morning just before dawn skip back into the houses and try and get a bit of sleep during the daytime, that is of course if you happen to be situated near any houses. If not then it’s dug outs day and night, if it rains well it’s just too bad.

This last time A Coy were forward, B on the left, and C in reserve, which isn’t half as cushy as you’d think, they want Ration Parties to carry the grub from mule head to Coy’s, they want Contact Patrols to get up to A and B and see that they are OK, they want listening patrols to go forward and try and get information. Ambush patrols to try and grab a Jerry, and it all drops on to the Reserve Company.

I’d only been up a couple of hours when they sent me to make contact with A. I had to travel across a track and Jerry had it taped, Spando Joe had a fixed line on it and occasionally he mortared it like hell. They told me all this and boy did I burn that road up, reported to A then fled back. A couple of hours after this I had to go again and this time I wasn’t so lucky, I’d just got out of the dip when Spando Joe opened up – whistling them around my ears, I promptly dived back, then he quietened down so I decided to try again, the distance to A was about 400 yards, I got half way when he started again. Syd, don’t think I’m exaggerating when I say a couple of bullets bored a hole in the ground six inches from my feet, I dived, well I should say we dived, (I had one fellow with me see) into the side of the track. I don’t mind admitting I said my prayers, anyway we got there OK and nearly got back when phut …. that’s the only warning you get from mortars, another dive into the mud and shit, surry I was trembling like a leaf when I got back.

My nerves aint as good as they might be Syd. I felt sick too because all up that track there’s the awful smell of death, mules, sheep, cattle and what once were men. God it’s awful, it’s bloody awful. In a couple of days time we’ve got to go back to it, one of these times I’ll crack up, I can feel it coming, and everybody else is the same. We had to send some lads back last time, bomb happy as they call it. One fellow went on this contact patrol (this was before I joined them), they had to dive and he dropped right on a rotten Jerry, imagine it Syd, it’s more than a human being can stand. I don’t think I’ll write any more about it Syd except to say that I went on four patrols altogether, and had to act as guide to the fellows who relieved us, then we marched for four hours sometimes up to our knees almost, in water before we reached the trucks. Nine o’clock Sunday morning we got here.

The mine story, well at that time we were following Jerry up see, which is different to static, advancing along the road in single file. We came to a place where Jerry had blown it up, made a big crater, went down and up again OK. A bit further on blowed again. I was in the leading section, we got down OK when bang the Signaller just behind us had trod on the first. Why neither of us didn’t is a miracle to this day. The corporal leading started to skirt around us to get at the wireless, he trod on another. Boy it was deadly and pitch-dark. Well something had to be done so we decided to try and get them out of the crater and back onto the road, so four of us got the signaller onto a gas cape and started keeping as best we could to the narrow track we’d come down.

We went OK until we got right to the top on the edge of the road when it happened. The fellows eased to the side to let us get past and one of them my old pal Pat Browning trod on another. It didn’t put me out Syd but it numbed me all over, knocked me flat on my face. God knows what thoughts went through my head the next few minutes, I didn’t know if I still had any feet or not, I could feel blood trickling down my back and arm. The signaller was moaning, he’d copped another lot, another fellow, only a lad he was, he just said simply “I’m blind fellows, I’m no good now”, Browny said “my two feet have gone lads”. Another fellow got it in the face. There was eight of us altogether wounded. In the meantime a bloke from the rear had got back to our HQ and they phoned for the Pioneers to come and locate the mines and get us out. 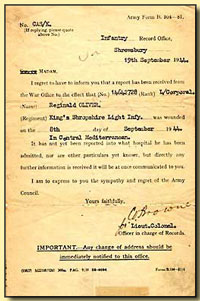 The chilling telegram from the War Office received by Sally Oliver, starting with the words “I regret to inform you”, telling her that Reg had been wounded but offering no further details

I’ve since heard that the signaller, Corporal and the lad died Syd. But Browny still lives with one leg and half a foot off, that’s guts if you like, for four hours he lay there before they could get to him and do you know what he had done, covered himself with a gas cape. They tell me that the Pioneers lifted another 20 odd mines from that track. As you already know I was lucky Syd, my pack took a lot of the blast, it was riddled, and the screw that went in my back just missed my spine, so here I am back again.

It’s OK I’ve wished once or twice myself that it had been a Blighty one, then I’ve shuddered at the thoughts of being without a leg or arm or maimed in any way for life. I want to be able to look after my wife and baby, but God knows, sometimes I think no sacrifice would be too great to get back to them to live happily and in no fear of death. I’ve had some narrow escapes but I’m still kicking and with God’s help I’ll come though. That’s all I can say, what is to be will be, nor can we alter it. Don’t dwell on anything I’ve told you Syd, and well I know you won’t let on to Mother or Sal that I’ve been in, nor that I’m going again.

By the time you get this I shall be looking forward to coming out again anyway. I’m glad the nipper is OK and thanks for your consideration of me. Write again soon as you can won’t you? Letters are such a help and keep them cheerful like you have done up to now, they are a real treat. Mike is something to look at now, gee I bet he is. I got mother’s photo today taken when he was 4 months, and Sally is in the little home now. So all that’s missing is me, won’t be long now though, can’t be can it, at least that’s what I like to think. Well cheerio for now Syddy and remember what I’ve told you is TABOO OK?

All the best for now and keep your neck oiled, has Freddy Barker landed home yet?

Remember me to him

Be seeing you, Reg.

“Home Sunday, Love Reg”, Reg’s telegram telling the family that at last he was coming home.