The information on this page is taken from a leaflet ‘Parish People No. 5’, produced by Madeley Parish Council on behalf of the Madeley History Group. The leaflet was compiled by Joy Bourne, Phyllis Hunting, Rosemary Jones and Val Wilcox, assisted by the group. This and similar local history publications are available from Jubilee House, Histh Street, Madeley. 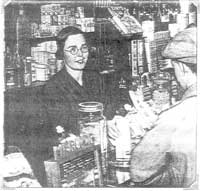 Edith Pargeter – better known as Ellis Peters, author of the Brother Cadfael novels – was very proud of her local connections. The youngest of three children, she was born in 1913 at Horsehay, the daughter of a fitting shop clerk at the Horsehay Works. She was educated at Dawley Church of England School from where she won a scholarship to Coalbrookdale High School. From an early age she was a prolific writer, composing poetry at the age of seven and contributing regularly to the school magazine as a teenager.

She left school in 1930, unable to continue her education because of economic circumstances. After a brief spell as a temporary clerk in the Labour Exchange she spent seven years working in Bemrose Chemist’s Shop in Dawley. (See right, click to enlarge)

She wrote avidly in her spare time and had her first short story accepted by a national magazine in 1936 – the same year as her first novel Hortensius, Friend of Nero was published.

In 1940 she joined the WRNS acting as a teleprinter operator and, on VE Day 1945, was awarded a British Empire Medal for “wholehearted devotion to duty”. (See photo below of Edith in uniform, click to enlarge) 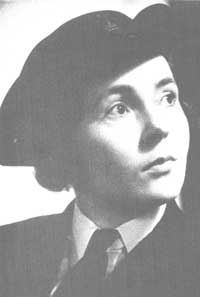 During the war she befriended many Czech airmen and, in 1947 attended a WEA International Summer School near Prague. She taught herself Czech and subsequently translated many works of literature from Czech into English. In 1968 the Czech government awarded her a Gold Medal for International Relations (services to Czech literature). She retained a life-long attachment to the country and its people.

In 1956, upon the death of her mother she and her brother moved to Park Lane, Madeley where she lived until her brother’s death in 1984 when she moved to a modern bungalow a short distance away at the Lee Dingle.

By this time she had become an established writer of both contemporary and historical fiction. Her career was lifted to new heights, in 1977, with the publication of her first Brother Cadfael novel A Morbid Taste for Bones which she had been inspired to write by the story of St. Winifred’s bones being transported to Shrewsbury Abbey. She went on to write another twenty Brother Cadfael novels and her stories reached a much wider audience when they were televised during the 1990s with Derek Jacobi in the role of Brother Cadfael. 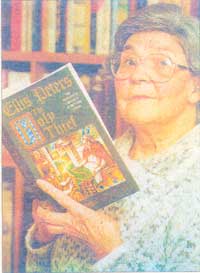 In 1994 she received an OBE in the New Year’s Honours List for her services to literature and, by this time she was included in the list of Britain’s top women earners. Altogether she wrote more than ninety books and used several pseudonyms. Her most famous pseudonym – Ellis Peters – was derived from her brother’s middle name Ellis (itself their grandmother’s maiden name) and a variation on Petra, the name of the daughter of a Czech friend.

She died in October 1995 and, although her funeral was a private affair, a Memorial Service was held in her honour at Shrewsbury Abbey in February 1996 and a window at the Abbey, depicting St. Benedict, was dedicated to her memory.

She was a very private woman who was humane, modest, loyal, intelligent and scholarly and, despite her left-wing convictions she always declared herself uninterested in party politics.

She had a great affection for every aspect of her locality, for her family and friends and for her beloved terriers and, although enjoying literary fame in her lifetime, she never lost touch with her modest roots.