This was used as a beershop for off sales only, in Church Street (between Johnsons the jewellers and the present day Employment Centre). It was also known as ‘The Sump’, due to its proximity to the village pump just across the road, that led to the cellars frequently becoming flooded. The licensee in 1880 was Joseph Durnall, however in 1897 the new landlord, William Pritchard, provided a supper for his customers and friends to help retain their loyalty and begin on the best of terms.

In 1917 the managing director of the owners, the City Brewery, Lichfield, praised the way the house had been kept, and the “very paying trade” it had done, stating that in “pre-war times, under normal circumstances, I do not think the house could be proved redundant”. It then closed, another casualty of the 1904 Compensation Act.

This photo shows the pub in 1885 – little has changed except the ivy has been cut down. The pub has no TV or jukebox and brews its own beer – a low gravity (and very low cost!) pale mild.

The All Nations, in Coalport Road (still known to most locals as Dabley Lane), is a particular favourite amongst real ale enthusiasts, having appeared in every single edition (28 to date) of the Campaign for Real Ale’s Good Beer Guide. Famous for its homebrewed beer, in the early 1970s it was one of only 4 pubs in the country to brew its own beer (one of the others was also in Shropshire – the Three Tuns at Bishops Castle).

At the time of writing (November 00) its future is uncertain, the family owners have decided to put it up for sale – it would be a tragedy if this totally unspoilt traditional Madeley pub was to close or go the way of so many others and become a mere tourist attraction. 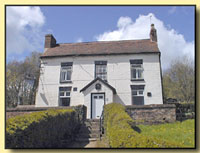 Updated 2009 – we are happy to say that the All Nations is once again open and thriving!

The pub has a long sporting history – quoits was a local favourite, international games between England and Wales were held at the pub. The Baguley family, who kept the pub for many years, were particularly active sportsmen. Walter Baguley, landlord, was captain of Madeley Town Football Club when it was formed at the pub in 1885. He also played for Ironbridge FC and captained Madeley Wanderers FC, as well as playing for Madeley Hockey Team. In 1904 Madeley Airgun Club was formed, based at the All Nations, with the then landlord, George Baguley, as a team member.

Rooms: 4 rooms up and 3 rooms down

The Madeley Parish Register lists the following as being resident at the All Nations in 1871:

THE ANCHOR closed as of August 2010

Situated in Court Street, near the junction with High Street. In the 1871 the Madeley Parish Register gave the landlord as Joseph Currier, aged 67, married to Lisina, both born in Wellington.

The innkeeper in 1888 was also ‘hall­keeper’ at the Market Hall (now Jubilee House).

Coddy Smith’s famous wet fish shop was just across the road from The Anchor.

Rooms: 3 rooms up and 3 rooms down

The Anstice Working Men’s Club, as it is usually known these days, has its own section elsewhere in this website. Surprisingly, for what is now the largest licensed premises in Madeley, there was no sale of alcohol until 1948, when the first bar was opened.

Update 2016: A lot has happened at the Anstice since this page was written, please see the Anstice website.

Although this site contains details of many old pubs that are no longer open, none can match the short lifespan of the Avenue Club. Years of campaigning on the Woodside estate finally led to the opening of this members-only club in 1989, on a site near the water pumping station on Woodside Avenue (the intended site, near the service station on Parkway, had been turned down by planners).

In 1999 the club was totally destroyed in an as yet unexplained fire.

The Barley Mow (centre left) pictured in the mid 1960s. The row of cottages beyond the pub were almost all demolished in 1968 to make way for Parkway, the Madeley bypass. The garden walls of the cottages on the right were demolished at the same time to make room for a pavement.

An old established local pub in Court Street, belonging to Wolverhampton & Dudley Breweries (“Banks’s”) since 1899. Much extended and modernised in the late 1980s (it was intended to demolish and rebuild, but most of the original building survived). In 1880 the ‘Modern Masons’ lodge meeting at the pub required of its members a monthly contribution of 2s and a 9s quarterly funeral levy. The money was invested in the Post Office Savings Bank, with the society trying to increase the balance each year. Members would receive 8s per week sick pay in 1880, £10 for a member’s death and £5 for the death of his wife.

In 1906 local magistrates ordered the pub to brick off a back room that had been used for secret drinking.

In 1912 the foreman of the Coalport China Works was given a purse of gold at a supper at the pub before leaving for the United States.

Madeley Wood miners’ Christmas Party, held in the function room at the Barley Mow sometime in the 1950s.

The man just visible on the left is Gordon Jones, next to him Mrs Dallow. The three on the right of the picture are (from left): Jack Harris, Charlie Richards and Albert Evans.

Rooms: 5 rooms up and 5 rooms down, including a clubroom

Standing in Ironbridge Road, at the junction with Wrekin View, the Beacon has a long sporting tradition, with many successful darts and football teams over the years. The pub became a listed building in June 1983. Click here to read more about Madeley’s sporting past, and see more photos of sports teams from The Beacon.