The Commercial Inn stood in Park Avenue, near the junction with High Street and Church Street. First licensed in 1841, in the 1880s landlord William Hancock advertised it as “Conveniently situated for L.N.W & G.W. stations, good and commodious rooms for private or public parties, with good stabling and lock-up coach houses”. (Vehicle theft is obviously not just a modern problem!)

Crowds celebrating the coronation of King George the Fifth in 1910. The Commercial is the second building from the left. The landlord at the time was Francis William Lycett (by an amazing coincidence his great grandson, Bill Geary from Canada, contacted us to see if we knew anything about him just as we were preparing this entry) there are signs on the wall for ‘Butlers Beer’ and ‘Good Stabling’. The shop to the right was the ‘Ironbridge & Coalbrookdale Industrial Co-operative Society’ grocery store, and on the extreme right F.E. Withers drapery shop (they advertised as “The People’s Drapers”).

The photo was taken from the steps of the Anstice Memorial Institute (click to enlarge).

From 1943 until its closure the pub was the meeting place for the Lord Forester Lodge of the Royal Antediluvian Order of Buffaloes, a friendly society usually referred to locally as ‘The Buffs’.

A popular pub used for many private and public parties and by the Lord Forester Lodge of the Royal Antediluvian Order of the Buffaloes (the Buffs). At one time leased to the Crescent Brewery, Burton but was a free house until bought by Mitchell’s and Butlers. The Commercial had a social fund and, every year, paid for the Madeley Rest Room members to go on an outing. It also arranged other treats for the elderly and had a special fund for service men and women.

In November 1969 it was announced that the Commercial, together with the neighbouring shops, was to be demolished to make way for the second phase of the new Madeley shopping centre. Originally Telford Development Corporation had told landlord Albert Evans he would have to be out of the pub by March, they then gave him three more dates: June, August and September 1969, before finally telling him that it would have to close in February 1970. (It was then demollished).

Shortly before closure Mr Evans told a reporter: “I know it is inevitable that it has to come to this, but the pub will be sadly missed by the locals”. Earlier in the year the regulars at the Commercial paid for the last trip they would ever be able to provide for the members of the Madeley Rest Room. As well as paying for the trip, the pub’s social fund had paid for their teas, and every Christmas gave the old people who used the pub and customer’s elderly relatives a pint. The fund was started by Joseph Richards, landlord from 1943 to 1952. He and his wife also ran a service men and women’s fund – customers coming home on leave while serving with the forces were given £2 pocket money. Happily the social fund found a new home at the Park Inn.

Rooms: 4 rooms up and 4 rooms down, including a clubroom 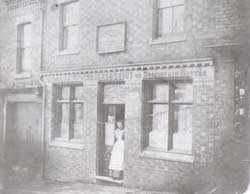 The Coopers Arms was the first public house in Madeley to close under the Compensation Act of 1904. A Shropshire Compensation Authority formalised a closure procedure for those licensed houses affected (paid for by the brewing trade).

The pub was situated in the High Street just up from the junction with Station Road, in premises that were subsequently to become a Telford Development Corporation rent office and then a local Credit Union Office.

The house was owned by T Cooper of Burton-on-Trent and was run by a manager. There had been three transfers of licence in the nine months prior to closure in 1907, and including those, seven in the previous fifteen years. The number of transfers of licence was one of the main criteria in judging whether a house was suitable for closure, particularly in the early years before the First World War.

The photo shows the landlady on the doorstep, we don’t know the date.

The Madeley Parish Register lists the following as being resident at the Coopers Arms in 1871:

This photo from 1920 shows regulars from the Crown gathered outside the pub ready to embark on their annual outing. Harry Lees, the landlord, can be seen wearing a waistcoat, seated on a barrel just to the left of centre in the front row.

The two signs above the door read “Home Brewed Ales”, and below, “Crown Inn, Harry Lees, licensed to brew and sell beer by retail to be drunk on the premises. Dealer in tobacco”.

Rooms: 4 rooms up and 4 rooms down

Licensed in 1831, the original Cuckoo Oak was demolished in the early 1970s, the modern pub was built on an adjacent site in 1986.

The original Cuckoo Oak, standing on the junction of the Madeley-Shifnal and Dawley-Bridgnorth roads. (The road to Shifnal was the one in the centre, with the pub immediately to the right.) The photo appears to be from around 1937, and was one of a series of Frith postcards of the Madeley area, at the time the Cuckoo Oak was an Ansell’s pub.

How the pub got its name is still a mystery – one suggestion is that there was once a nearby oak tree where the first cuckoo was heard.

We have recently heard from Brenda Franklin in Canada about her husband’s relatives who kept the Cuckoo Oak in the 1920s:

Robert Harold Franklin, his wife, Nellie May (Shipton), three sons, William, Ron and Norman, and grandfather William Jesse Franklin, moved to Madeley in 1924 from Bromsgrove, Worcester. By 1925, Robert Harold Franklin was the victualer (landlord) at the Cuckoo Oak and remained so until 1929 when the family, excluding their grandfather, William Jesse Franklin, immigrated to British Columbia, Canada. I say victualer, as I think this is the correct term. Correct me if I am wrong. I do not believe they owned the pub, only “ran” it.

Our William Jesse Franklin above, was a baker, and I wonder if there is a directory for that time, showing him with a business. Perhaps he helped Robert Harold in the pub. Were no records kept regarding the Cuckoo Oak pub? 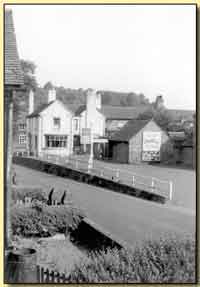 This picture of the Cuckoo Oak is believed to date from around 1960. You can see Bridgnorth Road in the foreground, the Halesfield Colliery mound can be seen over the rooftops. The peeling poster on the outbuilding on the right is for the National Savings Bank and says “Wanted – 2 Million Savers”. 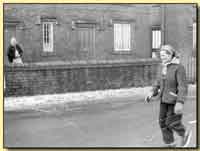 This picture is definitely from 1960. The cottages are those that can be to the right of the pub in the picture above.

Mrs Boden is watching Dr Barbara Moore on her epic 23 day walk from John O’Groats to Lands End, fuelled solely (allegedly!) by fruit juice, honey and cabbage. (Readers are advised not to try this at home.)

Dr Moore achieved fame/notoriety by claiming that she could exist for months on end from the nourishment she derived from sunlight and fresh air (she described this as “breatharianism” – again, don’t try this at home!). She died after being hit by a car on a subsequent trans-america walk.

A report in the “Telford Observer” in January 1970 captured the end of the Cuckoo Oak. It stated that the pub, which had been threatened with closure for some time, was finally to be demolished to make way for a traffic island linking the new Eastern Primary Road with the main Wellington to Bridgnorth road. Telford Development Corporation told the landlord, Mr Brian Hill, that he would be able to stay on at the pub for another 4 to 6 weeks. Mr Hill told the reporter that this was the sixth time in the 15 months he had been licensee that the closure of the pub had been postponed. By the time of its closure the Cuckoo Oak was the third pub in Madeley to close as a result of the new town development.

In 1984 it was reported that local councillors had given the go ahead for a new Cuckoo Oak to be built on the site of a former filling station near the site of the original pub – it was opened on Thursday August 21 1986 with Mitch Martin as landlord. Ten years (and £500,000) later in 1996 it became “Fast Eddie’s American Theme Bar”, with an American diner, two bowling alleys, pool tables, multi-screen video and a range of electronic games, all aimed, said owners Banks’s Brewery, at the 18 – 30 age group. They said that the idea was to provide a “lively, fun-packed environment where drinkers can enjoy games, sport and contemporary music, especially at weekends”. They obviously didn’t enjoy it for long because in 1998 it was relaunched by new owners Shepherd Neame as a “Hungry Horse” theme pub, extensively decorated with many ‘historical’ artefacts (few genuine, but at least they brighten the place up). At this rate of change they’ll probably have to start fixing the signs in place with velcro (alternatively, how about a “pub” themed pub, with a bar, beer pulls, tables, chairs…? – just a thought).