Demolished in 2009, the Dolphin opened in December 1970 – Telford’s first new pub. The Dolphin ran a lot of social events in its early years.

On the corner of Woodside Avenue and Park Lane. The name may have been chosen because of nearby Madeley Court which dates largely from the Elizabethan period.

Closed in 2005 as part of the Woodside regeneration scheme but reopened later that year under the new name of The Oak and Magpie.

The new name was reputed to be derived from an oak tree, in the pub garden, which was home to a particularly noisy magpie. A Mitchell’s & Butlers pub. In 2008 the name reverted to The Elizabethan. 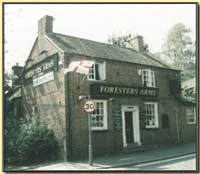 At the rear of the pub was a bowling green ploughed up to make way for the car park.

At one time owned by the London & North West Railway Co.

On Madeley Road. The pub is now a private house, last licensed in 1970s.

The bodies of the ‘9 men of Madeley’ were brought here after the 1864 disaster and the inquest was opened here before being transferred to the police station on Waterloo Road.

The photo shows Harry Walker, landlord (on the left) and Don Lister in the bar of the George and Dragon.

Junction of Woodside Avenue and Park Lane. The pub was demolished in the late 1960s, having first been licensed in 1791.

This was a popular pub with ironworkers.

Its name derives from the tool used by skilled ironworkers, particularly by forgemen. 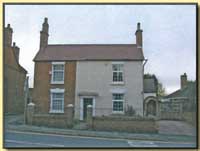 In Park Street, opposite the fish and chip shop.

This is now two private properties and we have no other information about it.

In Court Street (the pub is the third building on the left in the photo).

Demolished late 1960s, now underlies the traffic lights at the junction of Parkway and Court Street.

At one time owned by T. Cooper & Co. Burton-on-Trent

In Queen Street – now called The Venue. Built to serve the residents of the Hills Lane area and the nearby estates.