Another long established Madeley pub, the Park Inn stands at the junction of Park Street, Park Avenue and Ironbridge Road. In 1861 the licensee was 61 year old George Oswell, who according to the Madeley Parish Register was born in Broseley. Married to Susannah, 52, originally from Gloucester, they had two daughters: Mary, 16, who was unemployed at the time, and Jane Evans, 30, who was married to a china painter.

A happy scene at the Park Inn in 1945, with local children enjoying a party to celebrate VE Day.

The two girls on the left are Jeanette Ward and Annette Rodgers, the lads across the back are: ?, ?, ?, ? Workman, ?, ?, ?, John Evans, ?, John Oliver, Alan Heighway, Ron Yates, ?. The girls front right are (from the front) Gwen Dallow, Jean Barker, Janet Yates, Iris Workman and Eileen Brunt.

The landlord in 1874, John Tranter, was also a coal merchant, the present day beer garden was probably his coal yard.

Francis Ibbotson, the licensee in 1888, brewed his own beer in a brewhouse to the rear of the pub, parts of which can still be seen today.

The pub’s old bowling green, like that of so many other Madeley pubs, has made way for the present day car park.

In 1970 a reporter from a local paper ‘The Telford Observer’ visited the inn, and interviewed the then landlord William (‘Enoch’) Tristham and his wife Phyllis. In the ten years that the couple had then been ‘mine hosts’ at the Park Inn about £1,000 had been raised for the benefit of old folk in the area. In the year of the reporter’s visit enough had been raised to take a party of 140, including the members of Madeley Rest Room, on a trip to the zoo at Chester. Mr Tristham said that his pub had taken over the Madeley Old Folks Welfare Fund from the nearby ‘Commercial Inn’ in Park Avenue, on its demolition in 1970. The fund’s main organiser between 1945 and 1970 was Mr James Ball of Madeley Wood. He took the job on first at The Beacon, when Mr Scott was there, and then carried on for about 17 years at The Commercial. Towards Christmas the old people in the area received gifts of money from the fund to supplement their festive spending.

Mr Tristham told the reporter that he did not know how old the inn was, but recalled being taken there as a boy by his father, who was a miner – “it was a big calling place for miners in the early 1920’s” he said.

The Park Inn re-opened in 1983 after a 3 month, £70,000 renovation by brewers Mitchells and Butlers, converting it from a one bar pub to a two bar Victorian-style hostelry, with modern catering facilities. The late Norman Walton was the new landlord, although by the time of his untimely death in 1993 he had moved to the Royal Oak in High Street. Norman’s funeral in St Michael’s Church was one of the largest ever seen in Madeley, with the service relayed outside to mourners who could not fit inside.

[Update September 2016 – the building has now been demolished and the site is vacant].

Rooms: 6 rooms up and 5 rooms down

PHEASANT Closed as of August 2010 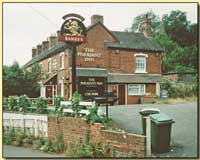 Whitmore Jones, who was licensee in 1871, was also a dealer in hides.

Daniel Adams kept the pub between 1863 and 1908 and was also a barge owner, corn dealer and land owner.

His daughter Louisa, who took over the licence, drove one of the first cars in Madeley.