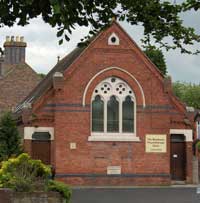 Continue along CHURCH STREET to the junction with PARK STREET. On the corner is the former Congregational Chapel (23) (plaque I). The chapel was built in 1874 and closed in 1985, by which time it was used by the United Reformed Church.

The chapel was always known locally as The Cognogs. For a number of years it was run as a guest house, and is now home to a Physiotherapy Clinic. 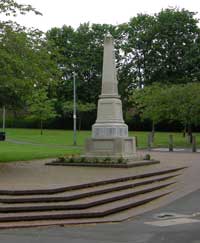 On reaching RUSSELL SQUARE, you can cross over the square to the War Memorial (24).

The War Memorial was originally situated beside the Congregational Chapel, in the middle of the junction of Church Street, Park Street and Park Avenue. 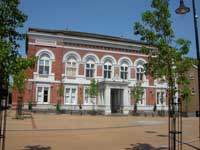 Retrace your route onto PARK AVENUE and continue until you reach ANSTICE SQUARE.

To the left is the Anstice Memorial Institute (25) (historic plaque). This was built during 1868-9 to an Italianate design by John Johnston of London in memory of John Anstice of the Madeley Wood Company. Inside, a handsome oak staircase leads to the upstairs concert room. Lloyds Bank had a sub-branch in the Institute from the early years of the century until 1970, and the building housed the original Madeley Rest Room. 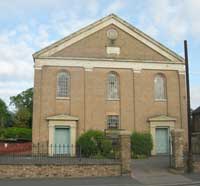 Walk to the end of PARK AVENUE and you will arrive back at the start of the trail. From the corner of HIGH STREET, you can view the Fletcher Memorial Church (26) (plaque J). This Wesleyan Chapel, which was built in 1841, has an imposing classical design with temple front in local yellow brick. In 1933, the chapel was renamed after the Revd. John Fletcher, a vicar of Madeley and a founding father of Methodism.

The single storey building to the rear as the original John Fletcher Primary School before it moved to its current location in Upper Road. More information here.

You have reached the end of the main trail. If you wish, you can now take a further detour –