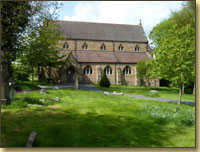 (The image on the right above the section menu is the original St. Michael’s, Madeley from a 1789 watercolour by Revd. Edward Williams, painted just after the demolition of the tower)

After the Dissolution (1540) Madeley probably remained quite a centre of recusancy as the Brooke family of Madeley Court were prominent supporters of the Catholic cause and a number of other fairly prominent local families (e.g. the Woolfe family of Upper House and the Purcells who lived at the Great Hay) were also Roman Catholics. Several priests are known to have lived in the area towards the end of the 17th century and in the early 18th century and two members of the Woolfe family entered the priesthood around this time – one as a Benedictine, the other as a Jesuit.

Both photos on this page are of St Mary’s Roman Catholic Church, High Street, Madeley. The second drawing is by Maggie Humphry. (Click for larger versions)

The more substantial houses probably had their own chapels or, at least, a dedicated room where the Mass could be celebrated but it remained illegal to build Catholic churches until after the passing of the Catholic Emancipation Act in 1829. However, towards the end of the 1760s, the building of a ‘mass house’ was underway on Madeley High Street. The land was donated by the Giffard family and the costs were met by donations from wealthy Catholics throughout England (including the Duke of Norfolk). The building was designed to look like, and serve as, a house but included a chapel at its rear. Its construction was strongly opposed by Revd. John Fletcher who was involved in numerous clashes with the ‘Papists’ but the project went ahead and the ‘mass house’ still survives as the presbytery for St. Mary’s church and traces of the original chapel decoration remain visible. Between 1804 and 1812 John Fletcher’s widow, Mary, is reported to have maintained friendly relations with the incumbent Catholic priest (Fr. Reeve) who is said to have tried (unsuccessfully) to convert her to Catholicism.

In 1849 a dynamic young Irish priest, named William Molloy, arrived in Madeley and determined to build a ‘proper’ church. He raised funds by many means (including the sale of lottery tickets) and St. Mary’s church was dedicated on 21st April 1852 and completed the following year. It was designed by Joseph Hansom (inventor of the Hansom Cab and architect of Birmingham Town Hall). It was dedicated to St. Mary of the Assumption and is said to be the first Catholic church to be built in Shropshire after the Reformation. It is thus often referred to as the ‘mother parish’ of the county.

In September 1882, the Missionaries of the Sacred Heart arrived from Issoudin in France and their priests and students took up residence in the presbytery and remained until 1887 when they moved to Glastonbury. From 1890 the presbytery was unoccupied as the parish priest resided in Shifnal and the building was rented out as a ladies’ boarding school (known as Arundel House) for a time from 1891. The house was then occupied by various tenants until 1969.

During the 1960s St. Mary’s church was extensively renovated and the parish priests returned to live in the presbytery from 1970 onwards. Further refurbishment has taken place during the 21st century