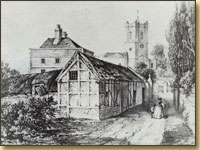 In 1716 there were eight Quaker families in the Parish but, when a meeting house was established, it was down in the Gorge.

Methodism in Madeley started with the coming of the charismatic John Fletcher as vicar in 1760. He encouraged societies at Madeley Wood and Coalbrookdale and brought John Wesley to preach in the town. Neither Fletcher, nor his equally energetic wife Mary, ever considered separation from the Church of England although both continued to foster the cause of Methodism. Fletcher died in 1785 but Mary continued to fly the flag of Methodism in meetings held in the vicarage barn at Madeley.

On the right we see St. Michael’s and the vicarage barn c.1830

After her death, in 1815, things began to change. Mary’s companion (Mary Tooth) held meetings in the upper room of her house at the corner of High Street and Station Road until her death in 1843 while, in 1833, the first Wesleyan Methodist chapel was built in Church Street (now a private house).

On the left is the former Wesleyan Chapel in Church Street. Drawing by Maggie Humphry. 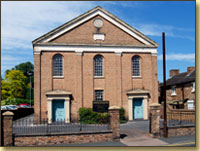 By the early 1840s the Methodist community had outgrown that chapel and a fine new chapel was built in Court Street in 1841-1842 and was dedicated to the memory of John Fletcher.

Pictured on the right is the Fletcher Methodist church in Court Street.

New Connexion Methodists arrived in Madeley in the 1820s and the Primitive Methodists in the 1840s. In 1859 a Bethesda New Connexion chapel was opened in Park Street at the corner of New Road. The chapel closed at the beginning of the 20th century and became a cinema which itself closed in the early 1960s and the building was converted to a private house.

On the left is the former New Connexion Methodist chapel (Park Street), drawing by Maggie Humphry. 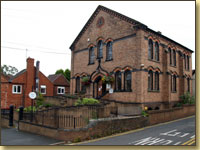 During the 1840s the Primitive Methodists held meetings in a ‘preaching room’ on Madeley High Street.

When they outgrew this it was replaced by a small chapel in Prince Street which, in turn, was replaced by ‘Mount Zion’ which was constructed on the corner of High Street and Station Road in 1865. In 1977 this, too, was closed and the building now houses the Peoples Centre.

The chapel originally housed a particularly fine organ. Click the image below to enlarge. 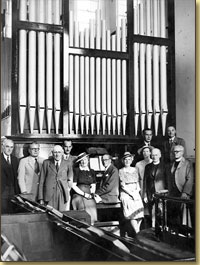