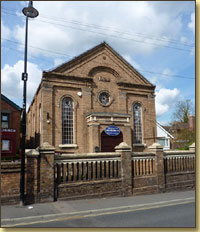 It is possible that the earliest Baptist meetings were held at a clockmaker’s premises, in Madeley, during the latter part of the 18th century and meetings were certainly held on in a former club room on Lincoln Hill from 1818. However it was nearly forty years later (in 1857-1858) that thirteen founding members formed the Particular Baptist church in Madeley when a room in Park Lane and the old court room were used for worship.

In 1858 the AEnon chapel was opened in the High Street and, in 1968-1969 a Baptist pastoral centre was created on Woodside. In 2012 the Baptists are planning a move to new, larger, purpose-built premises on the edge of town. 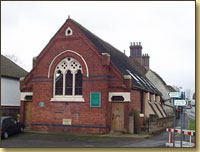 The Congregationalists began services in Madeley in 1872. Initially they were held in private houses but, towards the end of that year, a church was formed and a room in Park Lane was provided. In 1874-1875 a chapel was built at the corner of Park Street and Church Street. It continued in use until the 1980s by which time it had joined the United Reform Church.

Click to see a bigger version.
In 1883 the Gospel Army Mission began to use the Malthouse in Park Street but their tenure was short-lived. The Salvation Army had premises in Park Street in 1909 but their stay in Madeley also seems to have been brief and, by 1910, they had moved to Ironbridge.

In 1980 the Jehovah’s Witnesses opened the Kingdom Hall in Queen Street which was built, by the congregation, in a remarkably short space of time.

A Golden Light Christian Spiritualist church was established on Woodside in the mid-1990s but was demolished during the Woodside regeneration programme during the early part of the 21st century. The group continued to worship at a premises in Park Street for a further four or five years until the end of March, 2011.

The Springfield Christian Fellowship meet at Unit J1 on the Tweedale Industrial Estate where they have been established for some years. 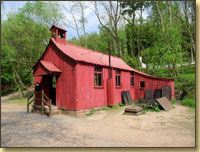 In 1977 St. Chad’s Mission Church was moved from its original site at Lodge Bank (Muxton) to the Open Air Museum at Blists Hill where it was re-erected. St. Chad’s was built in 1888 to serve to serve the scattered mining community around Granville Colliery and was one of a number of Shropshire examples of a ‘tin tabernacle’.

Like most such structures it was a timber-framed building clad with corrugated iron and was built at a time when it was widely believed, in the Church of England, that members of the working class could be attracted to worship in unostentatious buildings of this sort while a lack of smart ‘Sunday clothing’ would deter them from attending service in a conventional church. The church was rededicated by the Bishop of Hereford in June 1978.