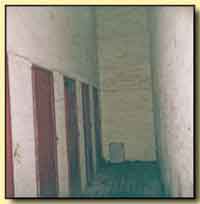 Madeley Poor Law Union officially came into existence on 6th June 1836 with an operation overseen by an elected Board of Guardians, 30 in number, representing its 12 constituent parishes. The population of the area covered was just over 22,000 and the average annual poor-rate expenditure for the period 1833-5 was 6s. 2d (about 30p) per head of population.

At first the Union used two former parish workhouses, that at Madeley and (probably) the Broseley building. However, severe overcrowding forced their closure in December 1868 and a new, purpose-built workhouse was commissioned and built between 1871 and 1875 (the entrance block bears three datestones for 1871, 1872 and 1873). It was designed by G.C. Haddon, a Hereford-based architect, who also designed workhouses at Ross and Monmouth. It was built at a cost of £12,000 and was intended to house 220 people.

The new workhouse was deliberately sited in a position isolated from the main area of occupation and was constructed in pinkish-brown local brick decorated with yellow, red and blue brickwork. It is thought to be the first workhouse to adopt the pavilion-block layout. In accordance with Poor Law Commission policy this design enabled the accommodation of ‘inmates’ of a particular category or condition in separate blocks or ‘pavilions’ linked by covered walkways. In fairness this policy did coincide with widespread attempts to improve sanitary conditions and reduce the spread of disease which was thought to be largely airborne.

At Madeley the design incorporated a central, single-storey block, containing a dining hall and kitchen, which was linked by covered ways to the two storey accommodation blocks. Other separate blocks included an infirmary, isolation block and workshops.

The residents were housed in “Nightingale Wards”, so called because they were of the design favoured by Florence Nightingale herself.

They were long and narrow with pairs of opposing windows to allow a through draught.

Beds (the optimum number being 32) were placed singly, or in pairs, between the windows and sanitary facilities were provided in towers attached to the outer ends of the wards and accessed by a cross-ventilated stem.