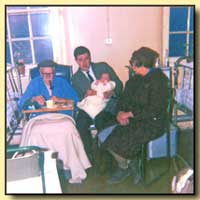 What Future for Lincoln Grange?

Lincoln Grange was leased to the private sector in 1991 and was managed by the Extra Care Charitable Trust until April 2005 when the lease was taken over by Coverage Care.

The new owners agreed to operate in the existing premises for about two further years but then proposed to construct a new, purpose-built nursing home and care facility for 72 elderly people in the Telford & Wrekin area.

The photo shows four generations of the Peel family at The Beeches in 1970. Click to enlarge.

Rumours abounded that Lincoln Grange was to be demolished and the site used for a housing development.

With a huge amount of local support the Madeley Living History Project applied to the Department of Culture, Media and Sport for the former workhouse buildings to be listed by English Heritage so that they would receive at least a modicum of protection.

The process dragged on over two years and, eventually, we heard that Lincoln Grange was being considered as part of a larger group of former NHS hospitals which are now redundant and whose future will be decided, by DCMS, as a group.

For the present (May 2007) there is no immediate danger but the fate of the old hospital which holds so many memories for Madeley people is still to be decided. 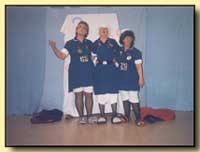 If it is to be a housing development it seems sensible (to the layman) to convert the standing buildings into apartments and slot in ‘new build’ around.

Too many Madeley buildings have been wantonly destroyed and often replaced by far less worthy substitutes.

The future of the building is out of our hands – but at least we have ensured that its story is not forgotten.

Just as this booklet went to press (10th May 2007) I was notified, by DCMS, that the Secretary of State had agreed that the building should be listed. A rare victory for local, public pressure!