The Parkhurst Cinema on Park Street, clearly showing its origins as a Methodist chapel behind the decorative facade. This photo was taken shortly before the opening of the cinema on October 10 1910 – it closed in 1958.

Immediately to the right you can see the premises of F Jones, house decorator, plumber and gas fitter.

Originally built as a Methodist New Connexion Chapel in 1859, the building on the corner of Park Street and New Road became a cinema in 1910, originally known as “The Parkhurst”. Here are some memories of a former usherette, Agnes Woodward (nee Brunt):

“Miss Lowe, a housekeeper and a good friend of Mr Stead (the cinema owner) came to see if I could help out in taking people to their seats. I had got a five week old baby daughter and said I couldn’t help out but Miss Lowe said “you come to the pictures twice a week” (there was a change of films twice a week). She persuaded my parents to look after my daughter, so I started, and worked for nine years. Saturday Matinee was a penny in the bottom and twopence in the balcony. In the week the cheapest seats ninepence, about 3 rows one shilling and the balcony one shilling and ninepence. These seats could be booked, I had a board with all the names on, many people always wanted the same seats, I remembered everybody and were they wanted to sit.

Also with films they came to see, when Bette Davies was on you were sure to see people that only came to see her, lots enjoyed James Cagney, Humphrey Bogart, Sidney Greenstreet, Peter Lorre and actors like them. Of course the love stories always drew a crowd. If a little sadness came into the picture handkerchiefs came out including mine. The first time I saw “Gone with the Wind” it was at The Grand in Wellington, costing me five shillings. Working at the West End I saw it 6 times, watching for four hours each time. Pictures I enjoyed were “Smiling Through”, “Rose of Tralee”, “The Desert Song”, “Pride and Prejudice” and “Wuthering Heights” — the Lassie films were always good. Tom Mix, Roy Rogers, Buck Cassidy — the cowboy films were enjoyed by many. The news was always first, then a short film and after that the main one that drew the crowds. Ice cream was sold in the interval, Mr Stead always gave a very good night’s entertainment.

Mr Smith worked for a long time in the projection room showing the films, also Mr Phillips, Alice Wright, Mona Wilson and Mrs Guy worked in the ticket office. Vi Yates, Mrs Helliwell, Lily Fox, Jean Helliwell, Amy Hale, myself and many others took people to their seats, kept the children in order and threw them out if we had to. My wages and all were £1 a week and I never had a rise. It was enjoyable work and a pleasure to meet wonderful people. All the staff were the best of friends. I remember silent films at The Parkhurst (as the West End was originally known), in black and white with titles on the screen telling you the story and what was said.” 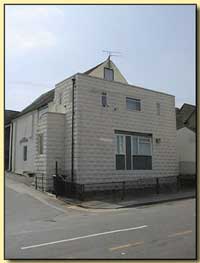 The former Madeley Cinema, on Park Street, photographed July 2000, after a spell as a light engineering works it is now a private house.

Gwen Groves (a member of the Local Studies Group) remembers the cinema from her childhood in Madeley:—

“Madeley once boasted a very popular cinema. First of all I remember it myself as The West End and later The Regent. My father also remembered it being known as The Parkhurst. The cinema was owned by the Stead family. An amusing little story my father told me from his boyhood is that he was waiting outside the Parkhurst one day when a car stopped and a man asked “Lloyds of London?”. He was referring to the film which was showing. “Oh no” my father replied, “Steads from the coal wharf!!!” I wonder what the man thought. It was at the West End that I savoured the delights of the Saturday matinees. The flat part of the cinema housed the tuppenies and the slightly raised and more elite part was the fourpennies. I was an only child and usually had enough money for the fourpennies. Before going in sweets could be bought from Hoods’ sweet shop which was adjoining the cinema, and across the road at Evans’ bread and cake shop you could buy lovely lemon buns sprinkled with sugar for a penny each, or thirteen for a shilling if you pooled money with friends. Oh those buns, I can taste them now. If you licked the sugar off first and then took small bites you could make them last for ages.

My husband, George, tells me he was less fortunate and only managed to sit in the tuppennies. He came from a family of seven and treats were usually paid for by one’s own efforts. He used to take pop bottles back to the pub, collect potato peelings for other folks’ pigs and hens, run errands, in fact anything at all to get his picture and treats money. The cinema would be packed and everyone highly excited before the entertainment began. Apple cores and other missiles soared through the air and paper bags were banged as they emptied. When the film began there would be a loud cheer and stamping of feet. Highly exciting films were shown such as Roy Rogers with his horse Trigger, Hopalong Cassidy and we mustn’t forget Tarzan and Cheeta of course. These were usually shown as serials and loud groans were uttered when the words “To be Continued” came on the screen. Much booing and cheering took place when the baddies and goodies were in conflict. Great enjoyment was had by all and it’s rather sad to think that children in Madeley today are missing this kind of fun.

There used to be a matinee on a Wednesday afternoon and this was my mother’s time for a treat. When I came out of school I used to go to the West End and Agnes Brunt the usherette would always take me in to join my mother for the last 15 minutes or so, no charge of course. I remember one Wednesday I wasn’t allowed to go in to join her because the film wasn’t suitable, that film was “The Snake Pit”. My friend Olive Heighway lived at the New Inn pub and as a reward for hanging a forthcoming attraction notice in the pub her family were given complimentary tickets for the featured performance. She often shared her ticket with me as instead of using it for herself in the best seats she was able to “pay” for two half-priced tickets in the second best seats. I think that tickets for the front two rows were often given to the Beeches (now an old people’s home, but then the local workhouse) as we often saw the residents filing in under supervision.”

Click here to read more of Gwen’s memories of a Madeley childhood.