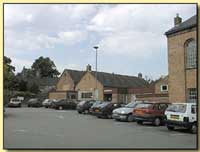 This article first appeared in 1991 in a booklet produced as part of the 150th anniversary celebrations of Fletcher Methodist Church. It was written by Madeley resident Amy Heighway, who became a pupil at the school in 1925 at the age of five.

The former Madeley Wesleyan School, to the rear of the Fletcher Methodist Church, in its modern guise as a community centre and home of the Madeley Preschool Playgroup

I cannot say that I remember my first day at school but I must have been taken from our home in Park Street, down Park Avenue, round the corner past the Horseshoes Inn and into Court Street to the Wesleyan School and into the playground where children would be playing, up the side of the chapel to the other playground, a smaller area. Boys and girls had to alternate weekly for the “top” and “bottom” play areas. Our first call would be the cloakrooms, which are the site of the toilets in the new Fletcher Memorial Centre. There were rows of pegs for our coats, with toilets on the right of the doorway. Do I remember rightly whether they were earth toilets then? I suppose that in 1925 they were (flush toilets came later because I remember moving from Park Street to our new home in Park Lane and the joy of a bathroom and flush toilet).

After hanging my coat up I would go into school. The door opened into the main room of the four classrooms. Two classes shared this room but I wasn’t to learn anything there until I was older. The infants room was on the left and there I started my schooldays. Miss Wall was the teacher, a tall rather stately lady who lived in Park Street and was coming up to retirement age, I remember Miss Oliver taking over while I was still in the infants class. It was in this room, though probably not as an infant, that I remember listening to the school radio programmes. We had books to follow the lesson. I especially liked the music lesson and I suppose that is where I first realised that I loved to sing. We sang a lot in that school, sometimes with Miss Clark, later Mrs Hart and sometimes with Mr Smith, the headmaster, but a lot of the time with Mrs Lovatt.

Mrs Lovatt also worked in the Sunday School and with Mr Lovatt playing the organ, trained the children for the Anniversaries. We had a day once a year when a selected group from the school filed into the church and on to the platform for our Anniversary. Mrs Lovatt conducted us and if anyone misbehaved or made a mistake they would hear about it in school the next morning. I loved those Anniversaries.

The four classrooms were divided by partitions which folded back and all the classes could be united for special occasions. Our Christmas party was one such time, it was exciting. Christmas was near and the classrooms were decorated with paper chains made by the children. The gas lights had to be lit, which meant someone made a spill and lit it from the fire in the stove to light the lights. At the end of the party each child was given a paper bag with an orange, apple and perhaps a pencil, small ruler or something similar. The rooms were heated by a big black stove, which had to be stoked. Unless you had a desk near to the stove it was not very warm in the worst of the winter, especially if you sat near a door which was continually being opened.

Discipline was strict but fair. Bullying was severely punished so I don’t remember a lot of it going on. Some things like tables were learnt parrot fashion but we remembered it once it was learnt. The teachers were dedicated and knew each child and parent which meant that parent-teacher relationships were very good. Quite a lot of the children would be known by the Governors of the school, another reason to behave and take pride in the school. As I think children today still do, we were placed in a certain “house” and we had a braid of whichever house we were in – blue, yellow, red or green, and so we tried for points for our particular house.

There were no school dinners in those days and no buses so we had to walk to and from school. I thought Park Lane to Court Street a good walk, covering the ground four times – down to school, home mid-day, back for the afternoon session and home again about 4pm. Some children probably walked further and a few were allowed to take sandwiches. I remember four families coming from Aqueduct at the school.

I don’t remember feeling too confined in the small playgrounds – even in the top playground. We were not allowed to go over the wall at the side of the Chapel. Some did occasionally go after a ball or something that had gone over but if they were caught they were in trouble. “Over the wall” is now a car park and I believe for some time before the closure of the school it was playing fields but it was private land when I was at school. Our playing field was across Court Street, where the houses of Coronation Crescent now adjoin Madeley by-pass. We had to march across Court Street to play netball or rounders and football for the boys, and often the girls would be there to shout encouragement to the boys of our school when there was a match on.

So I grew up and moved from one classroom to another and eventually into the Headmaster’s class. The “top class” was were some were only waiting to leave and get a job, some still learning and sorry to cease and some to take exams for the High School in Coalbrookdale. We were all again near the main door where we entered to start our school days. I have stood in that area of the Fletcher Memorial Centre and looked at the photograph of Mr Thomas, the headmaster for a short time when I started school and memories flood back. The way the desks were arranged, class mates, teachers, hard work and also the highlights like being taken to the West Midlands Show to see our work on display in one of the tents, and the yearly Music Festival held in the Anstice Hall where school choirs from all around the area auditioned in the morning. The successful choirs gave a combined concert in the evening and the Wesleyan Choir was always there on the platform. They were thrilling times for me.

The school production of “A Midsummer Night’s Dream”, circa 1950

Leftl to right: Rosemary Birch (from East Lynn, Church Street), unknown boy, Carol Higgs, Ruth Aldred. We are indebted to reader Joan Williams (nee Briscoe) for correcting the names accompanying this photo. She was at the school at the time aged 7 and continued to live in Park St. until 1968.

My daughter-in-law attended the school and later my daughter started her schooldays in the same classrooms that I had some time before. When its closure was announced we both felt very sad. She still says she loved that school but I am happy that my old school has been put to such good use and lives on in the Fletcher Memorial Centre.