Site Map Back to Homepage 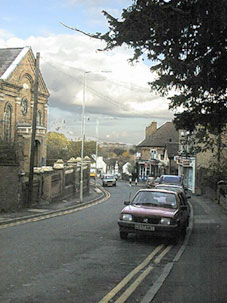 Madeley is situated in the south of the East Shropshire new town of Telford, approximately forty miles west of Birmingham, a couple of miles north of the somewhat better known township of Ironbridge. (Prior to the building of the Iron Bridge, and for many years after, most of the Ironbridge area was known as “Madeley Wood”.) Originally a thriving market and industrial town in its own right, it has been somewhat submerged by the growth of the surrounding new town developments of Sutton Hill and Woodside, which together with other new housing built since the late 1960’s, and the historic core of Madeley itself, make up the modern parish of Madeley. The many wooded pit mounts around the town are a reminder of its former importance as a mining town.

The town still contains a wealth of historic buildings; the High Street, Church Street and the southern section of Court Street are part of the Ironbridge Gorge World Heritage Site, although you wouldn’t be able to tell by their appearance – they don’t receive any of the care and vast amounts of public money that have been spent just down the road in “Disneyland on Severn”! The shameful neglect of central Madeley in recent years is the subject of a campaign by Madeley Parish Council – let’s hope they can achieve the recognition the area surely deserves. By the way – contrary to popular belief, Blists Hill Museum lies entirely within the Parish of Madeley, not Ironbridge as is frequently stated (even by our local newspaper, the Shropshire Star, who surely should know better).

Madeley continues to provide a focus for the community of the surrounding area, offering a wide range of facilities for a town of its size, including medical and dental surgeries, a well-stocked library, a major sports centre with its own dry ski slope and swimming pool, two comprehensive schools and a number of primary schools. There is a wide range of local shops, and a thriving market is held on Tuesdays and Saturdays. A wealth of community and voluntary organisations cater to the needs and interests of the local population. The area has excellent transport links with both the rest of Telford, neighbouring towns. and the motorway network.

Many local people are employed on the nearby industrial estates at Halesfield and Tweedale, which are home to a wide range of both British and foreign employers engaged in many different trades, especially engineering and electronics.

Politically, Madeley is part of the area governed by Telford & Wrekin Council, a new unitary authority established in April 1998, with a majority Labour administration. At a more local level, there is a very active parish council, which is also under Labour control. The area is represented at Westminster by the MP for Telford, David Wright (Labour).