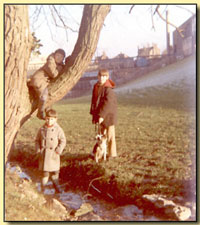 Local Studies Group member Richard Corfield remembers his childhood and the changes that came with the new town of Telford:

A Wintry scene at Madeley Court School in 1971, Richard (standing in stream), with his friends Steven Richards (in tree) Glyn Richards and Sheba the dog. You can just see Court Street in the background.

My mother’s family first moved to Madeley in December 1940. My grandfather, Jack Hayward, came from Bridgnorth, but my mother was born in Cannock in 1928 when my grandfather worked at the Silverdale pit. Prior to moving to Madeley they again lived in Bridgnorth, my grandfather was a miner at the Kemberton pit. He had worked there for four years, travelling by motorbike when wartime petrol rationing made it impossible to continue travelling the distance. The family upped sticks and moved to Madeley, to a new house in Coronation Crescent. The estate was new, but the house my grandfather had moved to, number 81 and next door, was newer than the rest of the estate. I believe the builders had run out of money and another contractor finished these two houses.

My mother Evelyn was 13 when she came to Madeley. She went to Madeley Modern School (now the Abraham Darby Comprehensive) until she was 14 when she left to go to work. My mother’s family was quite large. She had two older brothers, Harry (at that time serving in the Navy), and Wally, and two younger sisters, Beryl and Clarice, and in October 1943 another sister, Margaret, was born at Coronation Crescent.

In 1952 or 53 my grandfather bought Coddy Smith’s shop in Court Street (next to the Fletcher Methodist Church). This served two purposes. Firstly my grandmother Jessie Hayward had always wanted a shop, and secondly my Auntie Beryl was getting married. There was a housing shortage after the war, and she couldn’t get anywhere to live, so she moved into the house behind the shop. Owning the shop, which sold fresh fish and vegetables, also enabled an arrangement where my mother could work in the shop. This was rather fateful, as this is where she met my father, Doug Corfield, who used to deliver fruit and vegetables to the shop, and had done so since Coddy Smith’s ownership. My Dad came from Ludlow, but knew my Uncle Harry, who at this time was also in the transport business.

My parents got married in 1956 and moved in above the shop, with Auntie Beryl and her husband. My sister Janice was born there in 1958, but in 1961 my mother father and sister swapped houses with my granny and granddad, and the Corfield family came to reside at 81 Coronation Crescent. Auntie Beryl and her family moved to a new house in Dawley. I came along in November 1963, being only the second, and to this date last person to be born there.

The house, as with the rest of Madeley, has gone through some changes. Court Street, which Coronation Crescent corners onto, used to be a lot narrower, and wasn’t dissected by the Madeley by-pass (Parkway). A stone wall separated the garden of our house from Court Street. It was built out of slag, I presume from local furnaces, and some remnants of it can still be seen at the top of Gypsy Lane. My Granddad Corfield, who lived in Ludlow, always warned that the wall was unsafe and would fall over. Sure enough, in March 1963, on the night that he died, it did. It remained in that state until the road was widened. A row of houses came down at a right angle to Court Street, at the top of our front garden. These too were to be demolished to make way for the by-pass. The widening of the road meant that our garage had to be relocated, and was placed where my Granddad’s old pigsty and chicken shed used to be.

The house itself was modernised by the Council in 1973. We moved back to my granddad’s house in Court Street. My Gran had died in 1971, and the shop was now a sports shop, run by Mr Price. Back at Coronation Crescent the builders had emptied our loft – this had proved to be an amazing treasure trove. In an old basket was a WWII gas mask and my Uncle Wally’s tin helmet from the fire service. The house itself now had an upstairs bathroom, a large kitchen and central heating, all things taken for granted now, but at the time it felt that we had entered the modern age.

Many of my earliest memories are of demolition. Everything seemed to be being knocked down or torn up when I was a child The sound of walls crashing down and heavy machinery drowned everything out, and there was always a smell of wood smoke and brick dust in the air. Although I was young, I could sense that what was happening didn’t meet with the approval of the adults around me. This ranged from anger and disgust to a resignation that what was happening was perhaps for the best. Soon new houses, roads and other buildings started to appear. To my eyes they just suddenly appeared, and I couldn’t remember what had been there before. Another change was that Madeley, which although it was my universe I knew wasn’t a very important place and was never mentioned on the television, suddenly became very attractive to visiting dignitaries. I can remember the Queen coming to Tweedale to open the new industrial estate, Princess Anne opening Madeley Centre, and Prince Philip opening Madeley Court School. A great fanfare and commotion accompanied these events, but to someone quite small, I couldn’t see the fuss in watching some person who waved as they came out of a helicopter, or rode past in a big car with flags on it.

All things were new and changes were going on all the time. A certain resignation accompanied this, people shrugged their shoulders and got on with their lives. Changes did bring about adventure. New paths and roads that led to new places, buildings and demolition sites where you could play, always with the thrill that: a) it was naughty and b) it was dangerous. Trees were turned on their sides, offering a whole new perspective, large piles of dirt formed mountains to climb, and muddy fields made battlefields and ‘scrambling’ tracks. In addition to this were the older distractions, like the ‘Copy’, the woods surrounding Madeley Court and the new school. These themselves were the creations of upheaval, and covered the scars of earlier industries such as mining. We identified landmarks with our own names – the Helicopter Tree, the Treehouse Tree – important to and known only to ourselves. Occasionally these landmarks would fall foul of development, and we would mimic the emotions shown by the adults, as change affected our world too.

By the mid 1970s, the dust was starting to settle. The influx of new people seemed to have slowed down and the building work stopped. Things did seem to be better. We had the use of a state of the art sports and leisure complex with swimming pool and tennis courts. Things were new and seemed to be working. However, in the larger world things were happening that would have as great an effect on the area.

Going to nursery school was quite a local affair, then when I went to the infants in Upper Road, I was suddenly introduced to all kinds of different people. There were a lot of local kids, but now there were new faces that had different accents. These were from the new estates, and came from exotic places like Wolverhampton and Birmingham, or the ‘Brummies’ as my dad called them. It was at the infants school that I met my ‘best mates’. I still see most of them on a regular basis – Gary Doyle, Simon Clarke, Dave Perry and Trevor Lewis.

From the infants to the John Fletcher, this was the traditional route of education in Madeley. Normally I would have continued in this tradition and gone to the Abraham Darby, however, during this time a new school had been built – Madeley Education and Recreation Centre, or the MERC for short. It was just at the end of my road, and all my mates were going there. The MERC, or Madeley Court as it was later known, had opened in 1972, now three years later it already had a bad reputation. Not only did the school practise new teaching methods, but horror of horrors nobody wore school uniform. The truth of the matter was that many of us were too poor to afford uniforms. The school’s catchment area included Sutton Hill, Hills Lane, Madeley, parts of the Woodside and new Brookside estates. This negative outside view, shared I think by some of the teachers, only served to unify us. We were a very egalitarian bunch, and tended to stick up for one another. Madeley Court did have wonderful amenities, which I think added to the animosity towards it – a swimming pool, athletics facilities, a sports hall, plus fabulous science labs and other equipment.

Again there was a culture shock, by this time people were moving into Madeley from all over the country and further afield. Many of my school friends’ experiences were totally different from mine. Apart from those from the Black Country and Birmingham, they came from the Northeast, Scotland and Ireland. Many of those from Ireland had come, I presume, to escape the troubles in the North, and although they came from both sides of the ‘fence’ I can never remember there being any troubles coming over with them. My personal view of these new people, and I think it was shared by my friends, was one of openness and acceptance. Their experiences, accents and the general differentness fascinated me, and many became good friends.

I can remember not thinking much about what I would do when I left school. Choices were limited, enough to instil a sense of realism that most of us would end up working in a factory on one of the industrial estates, and that would be our lot, but as I approached school leaving age, it became apparent that even those limited choices were being cut. The best most of us could hope for would be a Youth Opportunity Programme Scheme or ‘YOPS’. Far from being depressing, however I think the attitude most of us took was that we were all in the same boat, and if we weren’t going to get paid very much, at least we would have a laugh. The camaraderie that had developed at school extended beyond its walls, and was used as a defence against the outside world.

School and Beyond: at the Museum

A new tradition had evolved. Instead of going from school to the pit or the Court Works, which were either shut or closing, the main destination for employment was a YOP Scheme, and the majority of these were based at the Ironbridge Gorge Museum Trust. There were a few luckier ones who managed to get a job in a factory or building site, usually by being in the know, but I don’t think there were many of my age who didn’t at some stage do a spell at the Museum. In all fairness, it was quite an enjoyable time. Looking back, however, it does seem ironic that Madeley and the surrounding area’s great industrial heritage should be reinvented through an employment programme to alleviate contemporary mass unemployment, and that which has been recreated represents our history in a rather twee and inaccurate manner.