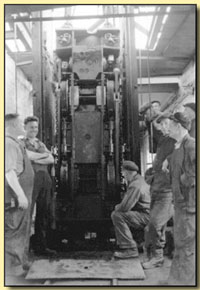 An unusual sight from the early 1950s (right) — one of Kemberton’s two diesel locos about to be lowered down the shaft, in a cage with the deck removed.

The water treatment plant, (left) installed to prevent iron particles in the water pumped from the pit entering the local Mad Brook.

The somewhat striking shape on the horizon is the dirt heap, the haulage engine for the dirt tubs can be seen centre left behind the treatment plant.

This ingenious piece of machinery received empty tubs from the cage and forwarded them for reloading.

This photo was taken in the 1950s after the steam winding engine at Kemberton had been replaced with an electric winder (the first in Shropshire) in 1937.

The pointer on the circular indicator on the left shows the position of the cage in the shaft.

The bitter end — March 1968, the Halesfield pit headstock was pulled down, the rest of the buildings were demolished shortly afterwards. 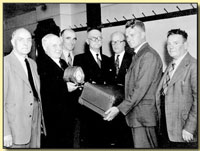 Madeley Wood deputy Frank Langford (father of Study Group member Mary Welch) is presented with gifts on his retirement in 1955. 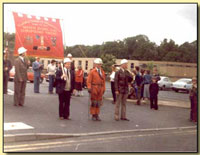 On closure in 1967 many of the miners from Madeley Wood transferred to the Granville Colliery in Donnington, some 6 miles away.

Granville finally closed in August 1979, the photo shows the start of the procession to Blists Hill Museum to hand over the union lodge banner (not the one in the photo). 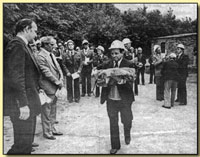 The scene outside the former Miner’s Mission Chapel (which originally stood near Granville Colliery) at the Blists Hill Open Air Museum in Madeley, as Granville NUM secretary Herbie Hirst hands over the banner to Neil Cossons, Director of the Ironbridge Gorge Museum.