On this page we will feature odds & sods that don’t fit in elsewhere, pictures that will later form part of larger features, and items sent by visitors to the site. 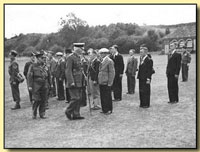 This Second World War picture shows Major Rawson inspecting Madeley Home Guard at Madeley Cricket Ground. The waste heaps of the old Meadow Colliery, which still dominate the Madeley skyline, can be seen in the background.

The men nearest the front to the right of the Major are: Eddie Bullock, Jack Bowen, Jack Oliver, Tiny Gough and Syd Oliver.

Less troubled times with the coming of peace – Madeley youngsters taking their Cycling Proficiency tests in 1947.

The gentleman on the left is Alderman Bennett, Mayor of the Borough of Wenlock, to which Madeley belonged until 1963.

The group standing immediately to the right of the lad having his bike inspected are (l to r) Beryl Noble, Gwen Dallow, John Oliver and Robert Jones.

An entry from the report book – the Fireman was responsible for checking that the mine was safe before work commenced, checking ventilation, roof support etc. This entry was signed by Thomas Higginson.

The book was found in the loft of a cottage of Hills Lane during renovation – the building was originally the colliery offices. 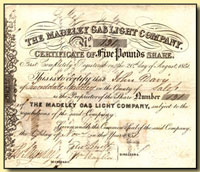 The gas works was sited in Hills Lane (near the present day John Randall School), and actually opened in 1852. Although gas came to Madeley relatively early, it wasn’t until 1932 that the town gained a public electricity supply, with the building of the power station at nearby Ironbridge. Gas lighting remained common until the 1950s.

Madeley’s famous Silver Band, pictured here on a visit to Rhyl some time in the 1950s.

The band had their own rehearsal room to the side of the old Three Horseshoes pub in the Market Square.

We don’t know anything about this photo, other than that it shows a football team outside the Miners’ Arms pub in Prince Street in the early years of the 20th century. The landlord at the time was William Myatt.

The pub is still there, and will soon be included in our section about local pubs.

Click here to find out more about local sports teams.

The sign on the boy’s back (top left) reads:

”Hold the traffic, we have an appointment with the Kaiser” 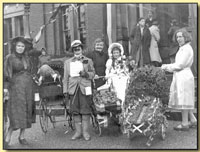 Happier times! the carnival in 1947. The girl in the bonnet is Gwen Dallow (now Mrs Gwen Groves, a member of the Local Studies Group).

Her mother, Edith Oliver, was the girl on the right of the 1917 photo above.

This old hand-coloured postcard is postmarked 1905, and shows the old Market Square and The Three Horseshoes public house
(The building on the left appeared on our previous home page, everything was demolished in 1968 to make way for a shopping centre). 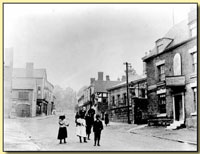 This scene from the turn of the century shows The Royal Oak pub, then, to the left, the County Court building.

Apart from the clothes (and the beer prices) very little has changed in the last 100 years (although we don’t recommend standing in the middle of the street, unless you want to become a road death statistic).

The Royal Oak is now closed (September 2009) and is in the process of being turned into an Indian restaurant.