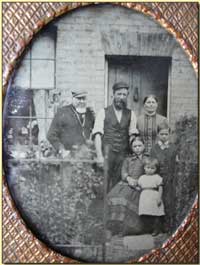 Some still unsolved plus one that is!

This photo has been sent to us with a request for more information.

This was the message: ” I have acquired a copy of an old photo of a family standing outside a terrace house with iron railings, and iron door knocker. Both the men have extrodinary beards and they are all in their Sunday best. The original is in a hammered copper frame. I believe that the family are probably Smiths and the address is probably Broseley.” 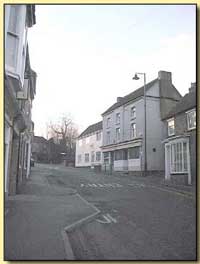 We have had an enquiry from the Telford & Wrekin Housing Trust, whose Madeley office is at 67 High Street (the tall grey building, centre, in the modern picture on left). With their usual mail delivery on Thursday 4th January 2001 they received a postcard addressed to “Mr & Mrs Jones (Radio and Television), 67 High Street, Madeley, Shropshire, England”. Postmarked 17th July 1963 the card was sent to Mr & Mrs Jones by their daughter Noeline, who was on holiday in Lech am Arlberg, Austria.

Apart from wondering why the card has taken 38 years to arrive, we would like to know more about Mr & Mrs Jones and their business. Preliminary enquiries amongst members of the Study Group have revealed that Noeline was about 35 in 1963, and that ‘Jones Radio and Television’ was a well known local business, trading from 67 High Street until around 1967 with the coming of the new town. Mr (‘Sid’) Jones worked as a carpenter at Kemberton Colliery for many years, while Mrs Jones (whose maiden name was Rock and whose family kept a rose nursery in the nearby village of Kemberton) looked after the shop during the day until Mr Jones retired from the pit. Mr Jones used to drive round the area in a threewheeler car collecting and delivering radio batteries (‘accumulators’) for recharging.

Sadly, we understand that Mr & Mrs Jones died some time in the 1970s, followed by Noeline in the late 1980s. We know that Noeline died from cancer, at the Compton Hospice, Wolverhampton. Other than that we are completely in the dark – can any readers remember the Jones family, and hopefully put us in touch with any surviving relatives, to whom we can finally deliver the card.

There were too many calls to list them all here, but thanks to everyone who helped. One caller mentioned that she had worked with Noeline at a solicitors in nearby Dawley, and that she had a cousin, Cora Rock, who had married a farmer from Shifnal, Dick Goliah. Another caller had worked with Noeline at a swimming pool company in Wolverhampton, where she was the Managing Director’s Secretary. Noeline had actually been bridesmaid at her wedding in 1973.Thanks to an item on BBC Radio Shropshire’s breakfast programme with Eric Smith, we have been able to fill in a lot of the gaps, but the post office were unable to give any idea where the card had been for the last 38 years. (Note to anyone researching local history – the internet has its uses but NOTHING BEATS LOCAL RADIO – the first information came in while the item was being broadcast, and then the phone just kept on ringing!)

Our latest call was from Richard Goliah, of Shifnal, son of Cora and Dick. He was able to give us a wealth of information about Mr & Mrs (‘Sid & Minnie’) Jones and his ‘Auntie Noel’. He confirmed that they had both died in the 1970s followed by Noeline 13 or 14 years ago. Sid was head carpenter/patternmaker at Kemberton Colliery, having learnt the trade as an apprentice working on aircraft in the Royal Flying Corps in the First World War. He remembers the walls of their home being decorated with old wooden aircraft propellors. Sid had a successful business, being the first in the area to offer a television rental service.On their retirement the family moved to Penn Fields, Wolverhampton. Richard has fond memories of his uncle and aunt’s shop and home in Madeley High Street and has promised to let us have some more information and some photographs.

Hopefully, together with the Wrekin Housing Trust, we can arrange for him to be presented with the long lost postcard, as the nearest living relative of Mr & Mrs Jones and Noeline. 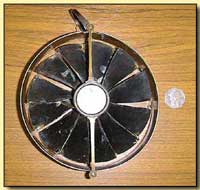 We used to post some mystery photos – where we knew what an object was but invited people to contact us with their guesses – or knowledge!

This is one of our ‘quiz’ photos:

The photo shows an item with a Madeley connection from the collection of Studies Group member Jack Smart. Can any of our readers guess what it is, and where or what it was used for?

A 50 pence piece is included to give some idea of scale.

The first clue is the maker’s name on the central panel (which carries two dials) – Negretti & Zambra, London.

A second clue – it was used for measuring something vital to health and safety.

At last – a suggestion from reader Syd Faulkner – he asks “is it used for measuring airflow?”. Hmmm, maybe, what do other readers think, and if they agree with Syd, where and why?

A WINNER!!! Keith Jenkinson from Codsall near Wolverhampton, an ex-Madeley lad, recognises the object as an anemometer, used for measuring the airflow in colliery roadways. This was vital to ensure the dilution and removal of gases, not only the obvious risk of methane or “firedamp”, but of other noxious or asphyxiating gases such as carbon monoxide and hydrogen sulphide (“stinkdamp”). The anemometer shown once belonged to former Madeley Wood and Granville Colliery Overman Lew Millward, and was made by the famous London firm of scientific instrument makers Negretti & Zambra, who supplied instruments to Captain Scott’s Antarctic expedition.

Our Logo – what’s that all about?

Our logo was designed by Rob Breeze, a member of the Local Studies Group. It includes three blast furnaces (a reminder of the groups of three furnaces that once operated at Madeley Court and Blists Hill), six church bells (a reference to the bells of St. Michaels Church, and the wealth of religious history in the Madeley area) and a miner’s pick, shovel and safety lamp (in terms of technical innovation Madeley was once one of the most important coalmining areas in the country). “The Three Furnaces” and “The Six Bells” are also commemorated in the names of local pubs. 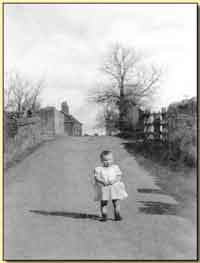 Esther Thomas on the old bridge over the Shropshire Canal in Queen Street originally known as Bridge Street).

Does anyone know who Esther Thomas is and when the photo was taken?