In case you don’t recognise this football ground, it’s in Casablanca, North Africa and the goalkeeper is none other than Madeley Local Studies Group’s very own RAF Corporal Jack Smart, photographed in November 1943.

Jack was playing for the RAF Select Eleven against the Moroccan national side, in a charity match which raised £835 for the Free French.

Madeley has a long tradition of pub and club sports teams – darts, dominoes, football, cricket and at one time, quoits – Click here to find out more about Madeley’s pubs past and present.

The annual Madeley Carnival always attracted large crowds to the procession and organised sports and games (see other photos on the Madeley Miscellany page).

This photo shows a winning Tug-of-War team from 1909.

This photo of the All Nations Darts Team from 1951-2 shows: 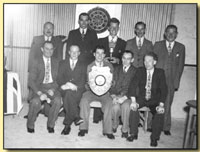 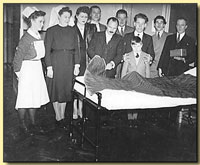 Not all just fun & games – in 1948 or ’49 regulars at the Beacon Hotel raised money via a charity darts league to buy the first electric blanket for their nearest local hospital – the Lady Forrester in nearby Broseley.

Front row: T Daley, Dennis Welch, Wilf Welch. The young lad at the front was Malcolm Scott from the Beacon.

The Ironbridge Youth Club Football Team circa 1950 (despite the name many of the players were Madeley lads).

This team once played against the Wolverhampton Wanderers Youth side