Material on this page is taken from a leaflet in the series ‘Parish People’ produced by Madeley Local History Group. The John Fletcher leaflet was compiled by Sandy Pledger and Shelagh Lewis (now Shelagh Hampton), with the assistance of members of the group. Various booklets and leaflets about the history of Madeley are available from Madeley Town Council.

“Fletcher of Madeley” was one of the outstanding figures of the early history of Methodism. The term ‘Methodism’ originated as a nickname applied to the 18th century revival movement, which was led by (among others) John and Charles Wesley but which was, originally, within the Church of England.

John Fletcher was born Jean Guillaume de la Flechère on 12th September 1729 at Nyon, a small town on the northern shore of Lake Geneva in Switzerland. He was destined for a military career but abandoned the idea in 1752 and came to England.

He was already acquainted with the Wesley brothers but had not wholeheartedly embraced Methodist teachings. He became tutor to the two sons of Sir Thomas Hill of Tern Hall (the predecessor of Attingham Park) but maintained his connections with the Wesleys and, in 1757, was ordained as a Church of England Priest.

After a short period assisting John Wesley in his London chapel at West Street, Fletcher returned to Tern Hall but continued preaching and, in 1760, was offered the living of Madeley of which his employer, Mr Hill, was patron. Apparently he was offered two alternative livings but chose Madeley because (it was said) the people were twice as bad and the living half as rich!

Fletcher seems to have been a charismatic preacher as well as an energetic and determined pastoralist and, although his earliest congregations were small, he gradually built up a following locally while also finding national fame through his theological writings. He formed a number of Methodist ‘societies’ – small, intense local groups who would meet regularly to discuss theological issues. In 1768 he was appointed non-resident Superintendant of Trevecca College – the Methodist seminary established by the Countess of Huntingdon, initially a devoted disciple of John Wesley’s. In 1771 he resigned following a doctrinal dispute between these two in which Fletcher declared for Wesley.

During the 1770s his health, never good, deteriorated further and he was obliged to spend periods away from his parish seeking a cure. He had probably contracted tuberculosis as only the mountain air of his native country, where he spent the years 1778-1781, seemed to offer relief.

On his return to Madeley he married Mary Bosanquet, a like-minded pious evangelical whom he had known for 25 years. Their marriage was childless and they devoted the remaining four years of Fletcher’s life to Madeley parish. In 1785 he and Mary started a Sunday School along the lines of that recently established by Robert Raikes in Gloucester (where the three Rs were taught as well as scripture). The laying of the foundation stone of the new Sunday School was his last public engagement apart from church commitments. He conducted just one or two more Sunday services at one of which he collapsed and, after a week’s illness, he died in on 14th August 1785.

After his death Mary continued his campaign first with the help of her adopted daughter, Sarah Lawrence and later supported by her devoted friend and the companion of her latter years, Mary Tooth. She died on 9th December 1815 aged 76. 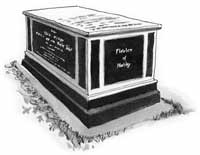 Fletcher had been marked out by John Wesley to be his successor as the guiding spirit of the Methodist movement. In the event Fletcher predeceased his mentor. In his memorial sermon Wesley said “…so unblamable a character in every respect, I have not found, either in Europe or America. Nor do I expect to find another such on this side of eternity”. Perhaps even more remarkable is the accolade attributed to Voltaire – arch-cynic and scourge of organised religion – who is reported to have said that, if ever he came to believe in Christianity at all it would be through two lives, that of Christ himself and that of Fletcher of Madeley.

John Fletcher is buried in a prominent plot close to the church, in St. Michael’s graveyard, Madeley. His cast-iron chest tomb also covers the remains of his wife, their adopted daughter and his wife’s faithful companion.