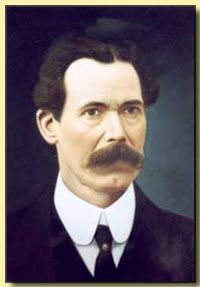 Charles Peskin (1868-1948) was born and lived in Coalbrookdale all his life. He was employed as a pattern filer by the Coalbrookdale Company and kept a diary of events in the area during the late nineteenth and early twentieth century. Most of the diary is a day to day catalogue of deaths and burials but there are numerous references to other incidents such as outings, visitors to the area, earthquakes (!) and even heated correspondence with a mail order company.

There are occasional references to the Madeley area, a selection of which I have culled and present below. The diary is in the possession of the Ironbridge Gorge Museum,and I am indebted for permission to quote these extracts, to their librarian John Powell who is also co-author with Michael. A. Vanns of the pictorial collection “South Telford”.

The complete diary may be viewed at the museum library by arrangement with Mr Powell.

Although not directly connected with Madeley I have included one or two incidents such as the closure of the Iron Bridge in 1934 as being of interest to local people.

1900 – May 8th
Charles Yate (Vicar’s son), Madeley, returned (from Boer War) with wound in bowels (similar to General Symonds). Horses took out of carriage and carriage pulled by 40 or more men with a rope. A big crowd at Madeley. The Volunteer Band, bells, firing etc. going on.

1902 – June 30th
Coronation bonfires lighted all over the Kingdom to commemorate the King’s being pronounced ‘Out of Danger’. The fire on the Meadow Pit was not anything like as large as the one in 1887 which was in honour of the Queen’s Jubilee. The Wrekin fire seemed all right, counted about 18 fires from the Mount.

1904 – Jan 17th
Edward Hall died. The last man who drove the stage coach which ran from Shifnal to Salop via “Link-on-Hill”.

1904 – June 20th
A child killed on the Madeley road above Gorbys Bridge just as the teachers were coming out of school. He was playing at the back of a railway dray and somehow the hind wheel went over his head. His name was Turner but he was sometimes called ‘Small’ as his mother (Mary Hewitt’s niece) had married a man named Joe Small.

1904 – Oct 1st
Earthquake shock felt across our district. I was in the Park Inn and heard a low long rumble as though some very large heavy vehicle had passed by.

1906 – Feb 9th
John Harvey found dead in bed. His occupation, wheeling small amounts of coal out to people, was not what he was brought up to. His father was once in a large way of business in Madeley (and I think, Wellington also), but I remember the shop in Court St. Madeley.

1906 – Dec 5th
Robert Norton died at Madeley Union (Workhouse). Son of John Norton, ex-convict who was condemned to death and had his sentence commuted to transportation for life, through the influence of the late Dr Edwards.

1910 – May 4th
Re-opening of Madeley Church by the Lord Bishop of Hereford after the restoration.

1910 – Dec 4th
‘Sunday’- terrible pit accident at Kemberton Pit, Madeley, causing the deaths of 5 men and 2 boys. The first draught down on the night shift at 10pm were only a short distance down the shaft (which is over 900 ft deep), when the wire rope broke right through, precipitating them all to the bottom. The remains were a horrible sight to see. Some of the bodies were buried at Madeley on Thursday Dec 8th by the Rev Bulstrode Price. The funeral was most impressive, crowds witnessing the sad cortage. All shops and public houses closed and muffled peals on the church bells.

1911 – November
Mr William Fox died, Madeley Wood, organ blower at Madeley Wood Chapel for many years. Born in 1824 he had the Cholera in 1832 when it raged here and he died to all appearances and was put in his coffin but he was only apparently dead for he was noticed to move and he actually got all right again and lived to a great age.

1913 – October
Fred Ward gassed at Kemberton Pit in the old working called the Jubilee Working, having gone to make experiments and not taking sufficient oxygen to last the time.

1919 – May 26th
Mr Riggs, pastor of Congregational Church, Madeley, died, falling down stairs the previous day (Sunday) when getting ready for the anniversary sermons, the shock proved too much as he was 92 years old.

1929 – Sept 2nd
Harry Jeffries, late butcher, Madeley, cut his throat in the field coming from Madeley Church. He had been an inmate at the Beeches.

1930 – December
Charlie Evans met with an accident which proved fatal, near where the old washing house was at Lane Pit Mount. A motor cycle ran him down and broke both his legs and an arm and fractured his skull. He died a few days after in Broseley Cottage Hospital.

1934 – June
Iron Bridge closed to traffic with the exception of pedestrians. Barricaded at Tontine end of bridge.

1936 – Mar 18th
John Jones (Ham Jack), Madeley newsagent, killed cycling on motor cycle near Sutton with papers, collision with lorry, aged 63. Verdict – accidental death – he was on his wrong side.