Amongst the many names of the dead of the First World War on Madeley’s War Memorial, including five who were awarded the Military Medal, you can find the almost forgotten name of Major Yate, who was killed at the very beginning of the war and posthumously awarded the Victoria Cross.

Most of the information on this page comes from an old Shropshire Star article by Toby Neal, and a letter to the Star by Chris Moore of Madeley. 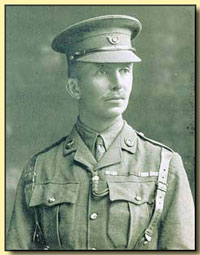 The Major belonged to a Berkshire family, a branch of which settled at Madeley Hall around the middle of the 18th century. He was educated at Weymouth College. He passed out of Sandhurst ninth out of 1,100 cadets and joined the King’s Own Yorkshire Light Infantry, seeing active service in the Tirah expedition of 1897 to 1898.

He was seriously wounded in the Boer War. On returning to Madeley for a spell of convalescence, local miners met the train at Madeley Market station, took the place of the horses drawing his carriage and pulled him through the streets back to his home in celebration of his many acts of bravery.

He married Florence Helena Brigg from Greenhead Hall, Yorkshire in St Georges Church, Hanover Square in 1903 – there were no children. 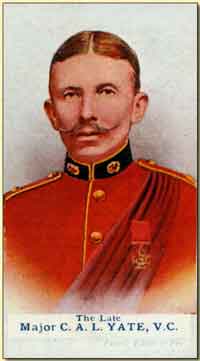 He became a major in 1912 and won his VC on 26 August 1914 at the Battle of Le Cateau, where Major General Sir Horace Smith-Dorrien fought his famous delaying action to check the German pursuit after Mons.

Major Yate’s citation in the London Gazette of November 25, 1915 read: “Major Charles Allix Lavington Yate (deceased), 2nd Battalion The Kings Own Yorkshire Light Infantry, commanded one of the two companies that remained to the end in the trenches at Le Cateau on August 26, and when all other officers were killed or wounded and ammunition exhausted, led his 19 survivors against the enemy in a charge in which he was severely wounded.

He was picked up by the enemy and he subsequently died as a prisoner of war”.

By all accounts he felt deeply humiliated by his capture and there are accounts of several escape attempts. Plans for a fresh breakout by several officers including CAL Yate were already under way when, on 18th September 1914, two German officers visited the camp and asked to see Major Yate alone. After this visit he apparently became visibly agitated and it was agreed that the escape plans should be brought forward and all resources concentrated on his effort.

With the help of his comrades, and disguised as a civilian, he was able to slip out of the camp on the night of 19th September. The following morning, because of his unusual appearance, he was stopped by factory workers, who demanded to see inside his haversack. At this point Major Yate cut his throat with a razor realising that the contents of his haversack would betray him as an Englishman and, at worst (given his fluency in German), he might be taken for a spy. It is possible that he had anticipated such an incident as, the night before his escape, he had apparently swapped his own safety razor for an open razor belonging to one of his fellow prisoners.

He died on September 20 1914 and is buried at the British Military Cemetery at Stahnsdorf, South West Berlin.

His Victoria Cross is kept in the Yorkshire Light Infantry Regimental Mueum at Pontefract.

Four other VCs were won at Le Cateau that day, including one by Lance Corporal Frederick William Holmes of the same regiment.

He wrote a few months later: “Major Yate was a thorough gentleman and a great favourite with us all. He had had a lot of experience in the Far East and at home, and I am sure that if he had lived he would have become a general. He was always in front, and his constant cry was ‘Follow me!'”. 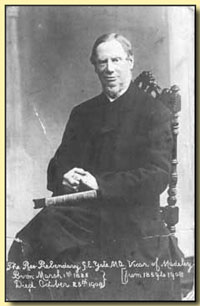 Major Yate was fond of riding, hunted with the Albrighton hounds, and played polo and football, and enjoyed skiing. He contributed unsigned articles to Blackwood’s Magazine, and was a top class interpreter for French, German and Japanese. He could also speak Hindustani and Persian.

Major Yate’s cousin was Sir Charles Yate of Madeley Hall, who was created a Baronet in 1921 and died in 1940.

A leaflet about Major Yate, with more detail, is available from Madeley Town Council.