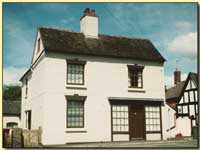 Originally built as a private house in the 18th century and converted to a pub when the railway opened. Converted to two houses in the 1930s.

Thomas Taylor, licensee in 1861, was also a farmer and blacksmith.

The first new pub to open in the then Dawley New Town and designed to blend in with the local architecture on Sutton Hill.

Named after a horse chestnut tree which stood outside the pub. Later changed to Red Lion.

The Chestnuts apparently celebrated a ‘Wake’ Festival (an annual occasion when drinksellers, by tradition, gave food, often beef to their customers). In 1896 the landlord gave away 1cwt of beef! Had its own football team in 1894 and an air gun team in 1906.

At one time owned by City Brewery, Lichfield. In 1997, customer Arthur Jackson won a nationwide competition for a ‘favourite pint’.

This former pub, in High Street, on the corner of Station Road, was first recorded as receiving a licence in 1850. The building has seen many businesses come and go during its long life. 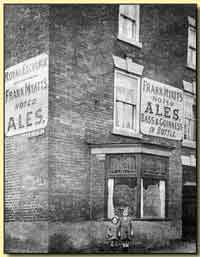 The Royal Exchange, photographed in the 1920s, some time before its closure around 1930. The last landlord is believed to have been a Mr Satherwaite, who left Madeley to return to Birmingham.

Mr Phillip Russell, who was the licensee in 1871, was 40 years old, born at Donnington and married to Anne, 46, who was born at Bradford. They had one son, also named Phillip, who was a 14 year old scholar, born at Weston-under-Lizard.

This old postcard of the Royal Exchange is believed to date from 1938, by which time it had lost its upper floor and was known as Exchange House. For many years the Jones family ran a newsagents here.

Rooms: 5 rooms up and 5 rooms down

This once-busy Madeley pub, in High Street, near the junction with Station Road, was first recorded as receiving a licence in 1831. With its large function room over the former stables it was a popular venue for local friendly and sporting societies – the Royal Oak Lodge of the Oddfellows was founded in 1843, and by 1900 had 200 adult and 100 juvenile members, with capital assets of nearly £2,500. Madeley Cycling Club was formed at the Royal Oak in 1896. The building immediately to the left of the pub in the photo below is the former county court house, now known as Lumley Hall. Before its opening in 1853 the court sessions were held in the Royal Oak function room (although the bar was presumably closed!). 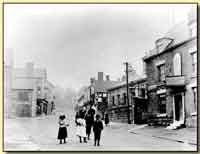 The Royal Oak photographed in 1905. This view, looking up High Street towards the shopping centre, has changed little in nearly 100 years. The sign shows the name of the then landlord, E R Gough.

In 1871 the landlord was John Shingler, a hatter aged 40, married to Jane, 41. They had two daughters, Sarah, 7 and Jane, 9, as well as two nieces, Sarah, 10 and Elizabeth, 8, who also lived with them. The servant of the house, Susannah Downes aged 60, came from Cowley, Staffordshire.

This old postcard of the Oak, also believed to date from 1905, is labelled “Bridge Street”, as the bottom end of High Street from the junction with Station Road was known until the 1920s. It was thus named, not, as is commonly believed, after the railway bridge in the background, which used to carry the famous ‘Coalport Dodger’, but after the old canal bridge near the present day Williams’ builders’ yard. Next to the Oak you can see Stodd’s shop, as described in the page on old Madeley characters.

Rooms: 7 rooms up and 5 rooms down

In March 1971 the “Telford Observer” reported that the future of the pub was in doubt – the owners had bought land near the pub with the intention of clearing the site and building a new ‘Royal Oak’ there. The then licencee’s wife (Mrs Betty Raynor) explained that the brewery (Greenall Whitley) wanted to provide a first class hotel in Madeley, and that the Royal Oak was simply not big enough. Fortunately the plans came to nothing and The Royal Oak today [Note: written 2001] is a thriving traditional local, with several cask beers always available through handpulls. In cold weather open fires are lit in both the bar and the small cosy lounge.

Update August 2010: the Royal Oak is now closed and has been turned into an Indian restaurant.