Named after the peal of six bells in St. Michael’s Church tower (although this was later increased to eight). The right-hand end was once a shop. At one time owned by the Wrekin Brewery, Wellington.

Named after the three blast furnaces of the nearby Madeley Court Works, which from 1843 to 1902 produced thousands of tons of iron. The site is now occupied by the Court Works industrial estate, there is still a small foundry on the site.

The Three Furnaces, photographed circa 1910/12 (obviously during the winter with snow lying in the background).The picture shows Charlie Morris (the butcher from nearby Aqueduct) on horseback, then (l to r): Margaret, Mrs Emily, Emily and Mr Joseph Clarke (landlord), and their married daughter and son-in-law Louise and William Hunter.

Nature of any proceedings:

This hand coloured postcard, postmarked 1905, shows the Three Horseshoes, at the junction of High Street, Court Street, Church Street and Park Avenue. The headquarters and practice room of the Madeley Band were located at the rear of the pub. The pub once had its own bowling green, the site is now occupied by the Anstice car park

Publicans had long been associated with the Madeley Board of Guardians, who among their other duties were charged with the duty of “protecting innocent people from the dangers of the drinking of alcohol”. The Shrewsbury Journal of March 1869 reported that William Page of the Three Horseshoes was serving on the Board, alongside James Page, a wine & spirit merchant and brewer of Ironbridge. In 1872 William Page became president of the local Tory society, he remained as landlord of the Three Horseshoes until 1877, later becoming a butcher.

This photo from the mid 1960s shows how little things had changed in over 60 years – within just a few years all the buildings shown had been demolished. Scroll down to see the same scene today. 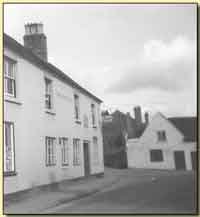 A photo taken shortly before demolition in 1968, looking towards the junction with Court Street and High Street. The sign over the door and the brackets for hanging baskets, visible in the picture above, have been removed. The building on the right is the former Pooles Sadlers (immediately to the left of the present day Jubilee House, home of Madeley Parish Council). In the background you can just see Moores bakers shop.

Rooms: 8 rooms up and 6 rooms down 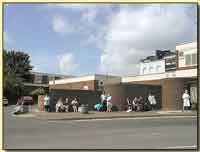