For such a small town Madeley was unusual in being served by not one but two railway lines and stations. Although passenger services ceased in May 1952 many older local residents still recall the holiday treat of being taken down to Coalport on “The Dodger” as it was affectionately known, with a picnic and paddling in the River Severn at Sweeney Cliff. 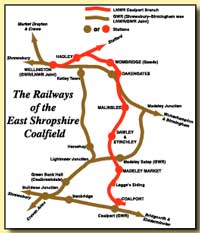 This map shows the main rail routes in the area. For the sake of clarity we have omitted the many tramways and private industrial lines which once crisscrossed the area – the Lilleshall Company’s system alone totalled over fifty miles.

The GWR Madeley Junction – Lightmoor Junction line, on which Madeley Salop was the only station, still carries coal trains to the nearby Ironbridge power station.

Madeley Market station photographed in 1932, looking towards the Coalport terminus of the line.

Blists Hill can be seen on the horizon – the area is now occupied by modern housing. 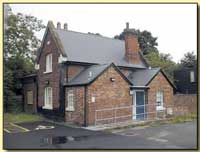 A rear view of the station taken in August 2001. The building is now used as offices by Social Services, after extremely sympathetic restoration. Like all the stations on the line except Malinslee it was built by Christopher Baguley, a Madeley builder, to an identical design. (Baguley was also the landlord of the All Nations Inn, click here to find out more).

The Coalport branch line, the main railway to serve Madeley for nearly a hundred years, came about as the result of an early Shropshire “new town” – the building of the nearby village of Coalport around 1794 to serve as an inland port for traffic on the River Severn and the Shropshire Canal. The idea was for the products of the East Shropshire coalfield to be sent downriver to the ports of Gloucester and Bristol, in the famous “Severn Trows” (large shallow draught sailing barges, hauled by teams of either horses or men for much of the upstream journey), whilst other goods could be brought upstream on the return trip. Coalport itself had a famous china works, and was also the home of an early chemical works – Lord Dundonald’s Tar Distillery, initially using tar from the “Tar Tunnel” at Coalport as a raw material.

Although initially successful, ironically the Shropshire Canal suffered from the activities of the main industry it was intended to serve – coal mining. Subsidence caused constant leaks, a particular problem on a high plateau with little or no surface water. Although the canal had been built with inclined planes rather than locks, to save water when moving boats between levels, its inefficiency became especially apparent after 1854 when the Great Western Railway opened the first line to serve the coalfield – the Lightmoor branch.

In 1857 an Act of Parliament was passed enabling the London & North Western Railway (who by now owned the Shropshire Canal) to build a railway from their Wellington to Stafford line at Hadley to Coalport, using parts of the bed of the canal (the stretch from Stirchley to Coalport was an entirely new line). In a triumph of optimism over expectation the major civil engineering works on the line, embankments, cuttings etc, were all built to take a double track, although only a single line was ever laid. The terminus of the line at Coalport was a model railway enthusiast’s dream – extensive sidings, carriage and locomotive sheds, a turntable, a transhipment warehouse – all serving a tiny branch line which for most of its life was operated by only two locomotives.

It is a mystery – at least to the author – why such complex facilities were provided at Coalport, when there was a loco shed at the other end of the line, only a few miles away in Wellington, and Coalport itself could never have been expected to generate much traffic. The layout at Coalport would suggest that traffic was anticipated to and from river barges, but by the time of opening in 1861 the Severn river navigation was at best moribund. For all the working life of the line the majority of traffic was on the section from Madeley north, with business from south of the River Severn mainly being captured by the GWR’s Severn Valley line. To add to the difficulties faced by the line, the single largest potential source of business – the Madeley Wood Company’s Kemberton and Halesfield Collieries – was served by the Great Western’s Lightmoor branch. The degree of vertical integration of local industry meant that much of the movement of goods between different sites, i.e., from pit to ironworks, which were often in the same ownership, was handled by the existing intricate network of tramways – it is difficult to imagine companies paying for the services of an outside contractor. This meant that goods traffic was only ever likely to consist of the import and export of raw materials and finished products. In particular the vast majority of coal, ironstone, limestone and clay were processed within a mile or two, or in some cases a few yards of their place of extraction. By 1912 the ironworks at Blists Hill had closed, followed in 1926 by the Coalport China Works, which moved to Stoke on Trent.

Passenger traffic was never heavy – for most of its life the branch was served by a two coach train, reduced to one for the last few years, travelling between the bay platform at Wellington and the terminus at Coalport. By the early fifties it was increasingly common for a Midland Red bus to replace the train, and the last passenger train ran on 31st May 1952. Goods traffic to and from Madeley ceased in Dcember 1960, with the closure of the line south of Stirchley – the whole branch was finally closed on 6th July 1964.

Both Merrythought Toys of Ironbridge and Maws Tileworks of Jackfield used Madeley Market station as a more direct alternative to the Severn Valley, which ran within yards of their factories. 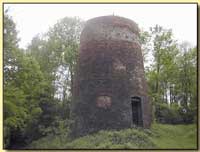 The old windmill near Madeley Court. The Coalport branch ran immediately behind the mill, crossing Gypsy Lane by the bridge that can just be seen bottom left. Some visitors have been puzzled by the position of the mill in such a sheltered spot – there wouldn’t have been enough wind to turn the sails! The answer is that the mill was built before the surrounding pit banks were thrown up, at one time this would have been an exposed location. At least one reader has suggested that it was in fact a watermill, but we think the location (nowhere near running water) and the shape rule this out. We think they are probably confusing it with the mill that once stood on the Washbrook at the far end of Madeley Court Pool.

The line entered the present-day parish of Madeley near the Madeley Court Ironworks, having just crossed the GWR Lightmoor to Hollinswood line via an overbridge (the abutments of which can still be seen), the nearby windmill was used as accommodation by the men building the line. It then followed an embankment (part of the route of the present-day Silkin Way long distance footpath) to Madeley Market station (so called to avoid confusion with the GWR Madeley station, known as “Madeley Salop”, which lay just east of the bridge just mentioned) having crossed Madeley High Street by a wrought iron plate girder bridge, adjacent to the Forresters Arms public house. Local legend has it that during the Second World War one of the drivers on the line, who was married to the landlady of the pub, used to throw large lumps of coal down the embankment into the backyard of the Forresters (for the benefit of younger readers, this wasn’t out of spite – coal was scarce in wartime!). 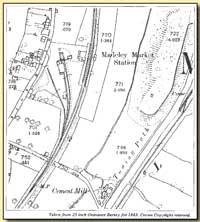 Madeley Market Station from the 1883 Ordnance Survey Map. Within a few years the passing loop and east platform had been removed. As in many towns the coming of the railway led to some renaming of streets – Station Road was previously known as Barker’s Lane

Following the fashion of the line, Madeley had extensive facilities considering the amount of traffic carried, especially passengers – the stretch through the station was originally double track with a platform either side, although it had been converted to one platform and single track by Edwardian times. The goods yard, now occupied by a small factory estate, once had three sidings and a large goods shed (carefully demolished brick by brick and beam by beam in the early 1980’s, supposedly so it could be re-erected in the nearby Blists Hill Museum – does anyone know what happened to it?). An identical goods shed can still be seen near Station Hill in Oakengates – I’ll try and get a photo soon. 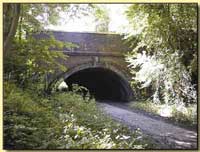 The tunnel at Blists Hill (really more of a wide bridge) under what used to be the main entrance to the Blists Hill works of the Madeley Wood Company.

After leaving Madeley Market the line continued past Blists Hill, where it is crossed by the spectacular Lee Dingle bridge, carrying the tramway that connected the Meadow pit and the Blists Hill furnaces and brickworks (served by Legges Siding, installed in the 1920’s and named after the then owner of the brickworks), then shortly after passing through a tunnel under the old works entrance it began a descent of 1 in 31 – believed to be the steepest gradient over which locomotive-hauled standard gauge passenger trains have ever travelled in the UK. Due to the severe gradient goods trains were worked from Coalport to Stirchley by two locos, one at the back in case of coupling failure. As the line left the parish, heading for the nearby terminus at Coalport, it passed under a bridge carrying the inclined plane that once connected the transhipment basin of the Shropshire Canal at Coalport to the rest of the system. 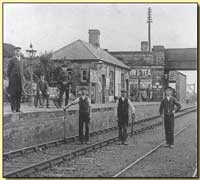 Even during its days as a passenger station it was only served by a couple of workmen’s trains each day.