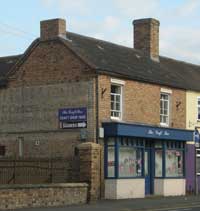 From Jubilee House, you can follow another extended route to Madeley Court Hotel. Turn right from JUBILEE HOUSE along COURT STREET. Opposite the Anchor Pub is 4 Court Street (34), once the home of Coddy Smith’s famous fish, fruit and potato stores (look for his faded painted advert on the end gable).

The sign can be seen more clearly in an earlier photo in our Madeley Pubs section – click here. 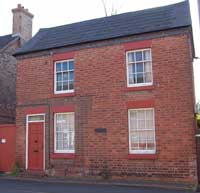 As you pass the Anchor Pub, look out for 76 Court Street (35) Polly Pritchard’s sweetshop (whose owner was notorious for cutting sweets in half to get the right weight) … 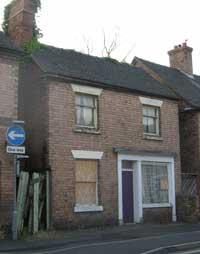 … and 72 Court Street (36), once home to Charles Bartlam’s photographic studio.

Next door is 71 Court Street (Albany House) (37) built in 1843 by Thomas Blocksidge (painters and decorators).

Crossing over COURT STREET by the Barley Mow pub you take the pedestrian crossing over PARKWAY.

Carry on along COURT STREET.

Continue until you reach COURT ROAD passing the ski centre on your left. You eventually take a public footpath with playing fields on your right that takes you to Madeley Court Hotel (38) (Plaque M), a 16th century manor house that has been converted into a luxury hotel.

Before the dissolution of the monasteries, Madeley Court was a grange of the Priors of Wenlock. It was acquired by Sir Robert Brooke in 1544. Improvements carried out by the Brooke family include a particularly fine grade I listed gate house and an interesting walled garden containing the remains of an unusual ‘astronomical toy’.

Later, it was tenanted by Abraham Darby I from 1709 until his death in 1717. After 1840, when James Foster was mining around the property, the house declined rapidly. It became ruinous and was eventually acquired by Telford Development Corporation before later restoration. Visitors to the hotel are welcomed and refreshments are available.

Retrace your steps back to Jubilee House.

If you prefer not to walk from Jubilee House, you can drive to the car park to the left of the hotel entrance and take a nature walk around the Madeley Court grounds.