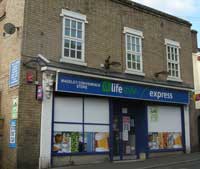 Town Trail menu on the right.

Downoad or view the map here.

Further up the High Street is Madeley Stores, 13 High Street (11) which was the childhood home of Matthew Webb, pioneering Channel swimmer. 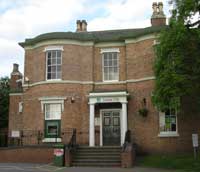 At the top of the HIGH STREET number 9 High Street (12) is an imposing early 19th century buff-coloured brick building, originally a private house, and currently occupied by Lloyds Bank. Facing onto the HIGH STREET it also has an ornate late 19th century shop front that used to be Bryans, a high class tailor & outfitter. 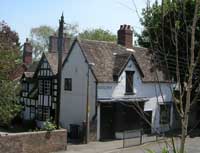 Turn left at the top of the HIGH STREET, walk past the public toilets and down a pedestrian ramp. At the bottom of the ramp, you arrive at the end of CHURCH STREET. On the left is Little Haye, Nos. 43 & 44 Church Street (13) (Plaque F) which is one of the oldest buildings in the town with a probably medieval timber-framed 2 bay hall with 17th and 18th century additions. Between 1880 and 1930, the building was used by Benbow & Jeffrey, an ironmongery business.

Further along CHURCH STREET you pass the Rest Room (14), a meeting place for elderly people, developed in the 1920s out of the religious and social work of local businessman Robert Moore. In February 1934 the Rest Room was opened in Park Avenue, funded by public donations. People were encouraged to buy a brick as a way of contributing. The bricks were inscribed with the name of the donor.

When this replacement was built in 1968 (before the original one was demolished to make way for the shopping centre), many of the inscribed bricks were incorporated into the wall to the left of the entrance. 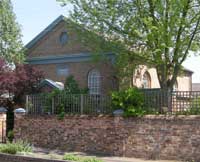 Next to the Rest Room is the former Infant School (15) which was the first Methodist Chapel in Madeley. Built in 1833, it was used as a Wesleyan schoolroom for poor children from 1841. It became a Church of England infants’ school in 1853, closed in the 1950s and is now a private residence. 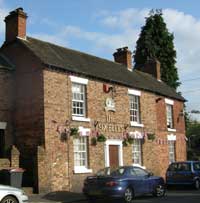 Cross over CHURCH STREET to the Six Bells Pub (16) which was named after the peal of six bells in St. Michael’s church. This was later increased by public subscription to eight bells, in memory of local people who died during the two world wars.

The right-hand section (in contrasting brick) used to be a sweet shop and tobacconists’s belonging to the Newbrook family, who used to run the nursery across the road, in present-day Church Close. 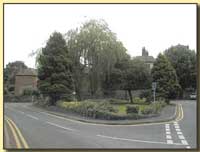 Continue along CHURCH STREET until you reach a triangular open space at the junction with STATION ROAD. Known as The Green (Crosshill) (17) it was the site of a barn used by John Fletcher’s widow Mary as a preaching venue (demolished 1831). There is a memorial stone at the corner nearest the church.

In the early 20th century six (yes, six!) houses existed on this triangle, with an outside toilet for each pair of houses. 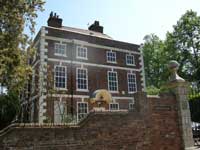 Further along Church Street is the Old Vicarage (18) (historic plaque), a 17th century high status red brick building. John Fletcher lived here from 1760 to 1785. His wife, Mary Fletcher, was allowed to remain in the Old Vicarage after his death and co-operated in a joint ministry with Samuel Walter and the ministers of the Wesleyan circuit based in Shrewsbury. From about 1799, she was joined by Mary Tooth, who worked for over 40 years in Madeley as preacher and class leader.

If you look closely you will see that only two of the twelve windows visible in the photograph are genuine. The rest are simply painted on, evidence of the Window Tax, in force from 1696 to 1851 as an early form of income tax. The more windows you had, the more you paid, which led to the bricking up of many windows across the country. 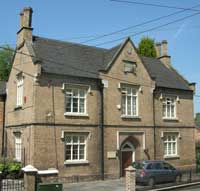 Opposite the Old Vicarage is the former National School, 17 Church Street (19). Built in 1841, this is buff-coloured brick with stone dressings in a Tudor style. Sexes were separated with girls upstairs and boys downstairs. It was later used for juniors until the 1980s and is now a residential care home. 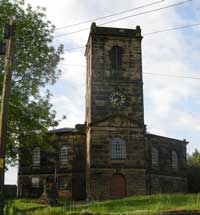 Next to the Old Vicarage you will see St. Michael’s Church (20) (plaque G). There has been a church on this site since Norman times, though the present octagonal building was designed by Thomas Telford and completed in 1796. The church remains largely as Telford designed it, apart from the addition of a chancel in 1910. The graveyard contains probably the best collection of cast-iron memorials in the country, including Fletcher’s grave and that of the ‘9 Men of Madeley’ who were all killed in a mining accident in 1864.

At this point you can take an extended route by turning left along COALPORT ROAD (see DETOUR A) or continue to follow the main route along CHURCH STREET (please be careful along this part of the route as there are narrow or no footpaths).