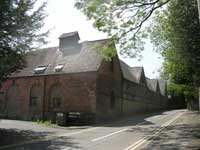 On your left you will arrive at Upper House & ‘King Charles Barn’ (21) (historic plaque). It was built around 1621 as a farmhouse by Francis Wolfe, but has been much altered. Around 1876 it was acquired by the Legge family, who owned Blists Hill brick and tile works. In 1937 it was inherited by William Dyas, one of Madeley’s sporting heroes, who once played cricket with Dr. W.G. Grace.

The adjoining 17th century barn (pictured) is famous for being a hiding place for King Charles II after the battle of Worcester in 1651. Used as a local market in the 18th century, it has recently been converted into private flats.

During the Second World War the barn was home to the Coventry Gauge Company, evacuated there to avoid the bombing.

As you follow CHURCH STREET around to the right, there is an attractive group of buildings including Madeley Hall (22) (plaque H). The Coach House to the Hall is pictured on the left. The hall was a high status red brick building of 18th century date and was home to the Yate family in the 19th century. 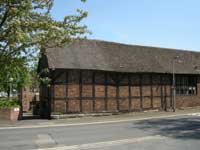 The adjoining 17th century barn was donated to the people of Madeley by the Yate family and was used for many years as the Village Hall. It is now used as a community facility for the sheltered housing scheme.

(The plaque is located on the barn).

More about the history of Madeley Hall and Hall Barn.

Continue along CHURCH STREET to the junction with PARK STREET.

or you can continue to follow the main route by turning right onto PARK AVENUE – continue the trail here.